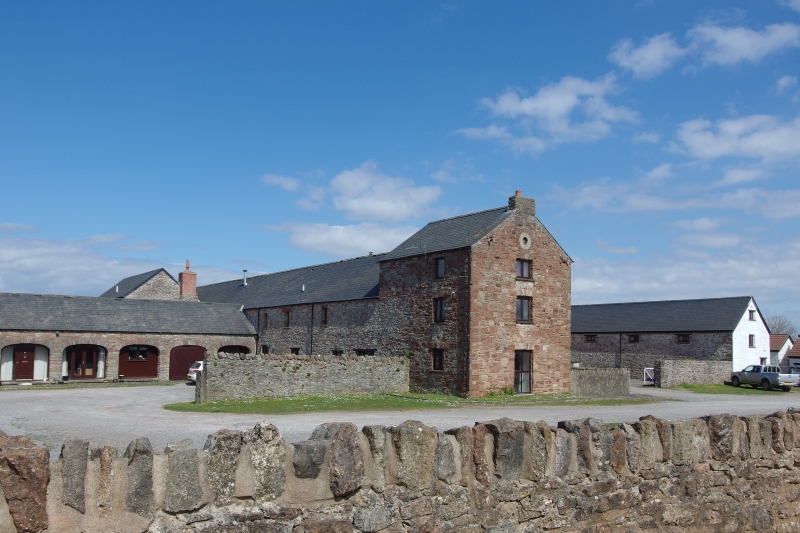 Location: Cog Farm lies W of the T-junction in Cog, NE of Sully village; the farmyards and farm ranges are to W of the farmhouse.

Built c 1816-17 by Evan Thomas of Sully House; some later C19 enlargements. A model farm of this size reflects the agricultural prosperity of the region in C19 and the associated large group of probably contemporary rickstands indicates the volume of corn grown. Model farm design of E plan. Later the W arm was extended and the N projection to centre was enlarged. Includes farmyards to front and a separate rickyard to rear. The layout is designed for the most efficient distribution of feed from the barn to the animal sheds. Yards are not enclosed in the Scottish manner but are open like in East Anglia. Cog Farm probably also used wind power, like neighbouring Hayes Farm where a windmill is still existing.

Evan Thomas, born in London but son of Henry Thomas of the Llwynmadog Estate in Brecknockshire, was the estate farmer from 1811. He reduced the existing 5 farms and 4 tenements to 2 large farms, Cogan and Hayes. All hedges and ditches were removed and replanned. From 1814-17 Evan Thomas farmed the whole parish and paid all tithes and rates; a number of Scots later worked the land including the Bland brothers: John Bland appears for all Cog property in the tithe apportionment of 1846. Thomas became High Sheriff of Brecknockshire 1813 and Chairman of Glamorgan Quarter Sessions 1823-32. Valuation of Sully Estate in 1824 and subsequent records give details of the agricultural regime including a seven year crop rotation and fertilizing through use of lime and seaweed Evan Thomas died 1832. JJ Guest who became owner of Sully Estate and instituted further refurbishments was related to Thomas' widow and proprietor of the Dowlais Ironworks - the source of ironwork of the roof including iron pegs; he was also first Chairman of the Taff Vale Railway. In a report on the state of agriculture in Glamorgan by Joseph Darby of 1885, Cog is described as a farm of 700 acres (283.5 hectares) of which 550 (222.8) were arable, the land at that time managed on 4 and 5 course rotation, with an evidently large proportion of arable to grass. Most units were converted into separate dwellings late C20. Before conversion, some food processing machinery survived, together with water tank in tower; the hammels had feed passages along the back walls and the rear barn had a stone tile roof.

Rubble buildings, some limewashed and with slate roofs, some corrugated replacements in the unconverted sections. The 2 yards are divided by a central N/S barn and the transverse buildings fronting the yards are divided into twinned hammels with cambered-arched openings with loft above to right range. The left hand yard has a long stable range at right angles closing the western side of the farm; this has been extended forward in later C19 and includes a 2-storey gabled central bay with dovecote. Another addition is the 3-storey red sandstone gabled 'tower' block to front attached to the gable end of the central barn; this may have been an engine house with the more substantial construction being due to the housing of machinery for animal feed processing. The right hand yard was formerly covered in by a modern shed and the hammel arches are partly blocked; loft openings with sandstone voussoirs above. Cartshed and granary close the eastern side of the farm with cambered-arched cart openings along E side; loft above and loft steps at rear. At rear is a further barn added in line to the main barn with access from front courtyard created through hammel range and cart entry on the gable end; later addition to W side, the 2 now forming parallel gabled wings. Only the 2 E ranges remain unconverted into dwellings.

The most significant interiors are those to the rear barn and the stable range both of which retain early cast-iron roofs: arched-braced trusses with diagonal struts and central vertical members that join the 2 triangular parts of each truss together. The rear barn was lofted; later barn has simple timber trusses; the 'tower' has A-frame trusses; roof with staggered purlins to the cross range.