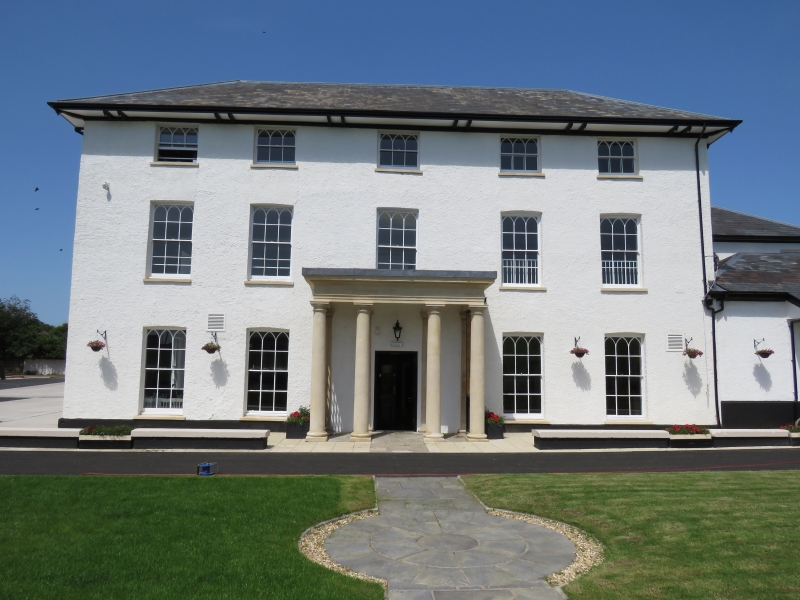 Location: On low lying ground near the Rhymney River, reached by a short drive off the road, within the housing estate but with open ground S and E.

An Elizabethan mansion remodelled 1825; a recorded but no longer surviving fireplace was dated 1587 and reputedly incorporated the arms of the Morgan family. Llanrumney (Llanrhymni) originally belonged to Keynsham Abbey in Somerset. The monastic grange became the property of the Kemys family of Cefn Mably in the late C16 and passed into the Morgan family when Henry Morgan married Catherine Kemys. Three generations of Morgan acted as Sherriffs of Monmouthshire in C16-C18. Edward Morgan became Deputy Governor of Jamaica and his daughter married a relative, the notorious buccaneer Captain/Sir Henry Morgan born 1635, whose father's brother William Morgan was an owner of the Hall. A plaque in the Hall commemorates Henry Morgan, whose adventures in the West Indies led to him being eventually created Lieutenant Governor and being knighted by Charles II; he died 1688. Morgan Morgan, Sheriff of Glamorgan in 1726, was the last in the male line and the estate passed by marriage to the Lewis family. In the mid C19 the Hall was occupied by the eminent Professor of History, E A Freeman. It was acquired by Charles Crofts Williams of Roath Court in 1859 and his descendant Llewellyn Williams lived there until the development of the surrounding housing estate. Tithe Map shows original entrance was via a long drive from main road on the crest of the hill. First edition OS map shows Hall with apparently walled garden to N with formal beds and orchard to W; Lan-Rumney Farm is close to SE and corn mill and millpond to W. A legend emerged in C19, fostered by Lady Llanover, of 'an ancient block of masonry in the cellar encasing the headless body of Llewellyn the Last'. The house was substantially rebuilt in 1825 with Gothick windows and further refurbished c 1900 with addition of billiard room, alterations to hall and staircase. It became a remand home in 1952 when the surrounding housing estate was developed and later a hotel/public house which in turn was refurbished in late 1980s.

Former mansion house now a public house. Of rendered stone with hipped mostly Welsh slate roof with overhanging eaves with boarded soffit and double-bracketed eaves; very narrow stone ridge stacks with narrow cornice. Main entrance frontage of 3 storeys faces S; side elevation W of 3 storeys has single storey rear wing, a skittle alley; side elevation E has lower 2 storey hipped roof wing stepped back with lean-to and single storey hipped-roofed billiard room at front. Main frontage has a 5-window range of Gothick glazed cambered-headed sashes with shallow reveals and narrow sills, 6-pane to upper floor and 12-pane to the first floor, and larger 12-pane to the ground floor with the sills at plinth level. Central flat-roofed portico with two pairs of Doric columns at front supporting an entablature with pilasters to rear. The W elevation, facing road, has similar windows with Gothick glazing, 3 on top floor, 4 on first floor, 2 on ground floor, one of which is tri-partite, with doorway end left; attached is the single storey skittle alley which has 4 windows with replaced glazing. The E 2-storey extension has margin-glazing, the attached single storey billiard room has wooden mullions and transoms, all windows cambered-arched. RCAHMW survey 1981 refers to first-floor window on N side with 2 square-headed lights, sunk-chamfered dressings, plain hoodmould and adjacent large chimney projection; these together with some thick walls date from the early post-medieval building.

Interior has main rooms either side of entrance which leads to a large open stair well, part of which has been turned into a bar. Room to left retains moulded plasterwork ceiling, reputedly C16, probably repaired, incorporating lozenges, hexagons, fleur-de-lys and Tudor roses; these shapes are echoed in mouldings on the window shutters and soffit, and on a panelled dado; Tudor-arched but not original fireplace; parquet floor. Room to right also has moulded plaster panelled ceiling of different design but again incorporating Tudor rose motif; also with a decorative cornice and strapwork-style band below; heavily reed-moulded architrave to windows with panelled shutters and soffit; renewed fireplace. Staircase hall has a metal grate of probably c 1900, narrow coloured tiles in herringbone design, with heraldic mosaic plaques, and coffered mantelpiece; on the wall is a plaque unveiled in 1988 to mark the 300th anniversary of the death of Capt Henry Morgan and his association with Llanrumney and Llanrumney Hall. Grand dark polished wood staircase with decorative finials to the newel posts and turned balusters rises to a landing with the balusters continuing round the 3 other sides of the open well. Landing is lit by a 3-bay gabled roof light supported by bolted king-post trusses resting on face corbels; doors off landing retain moulded surrounds with panelled reveals and soffits, also shutters, from the earlier C19 remodelling. RCAHMW survey of 1981 reports a dressed stone doorway with 4-centred head and plain chamfered jambs reset in a late C18/early C19 barrel-vaulted cellar.

Listed II*as a house of importance in the history of South East Wales though now surrounded by housing development. Llanrumney Hall retains much of its early C19 appearance including a complete set of Gothick windows as well as an important C16 core and associated plasterwork.