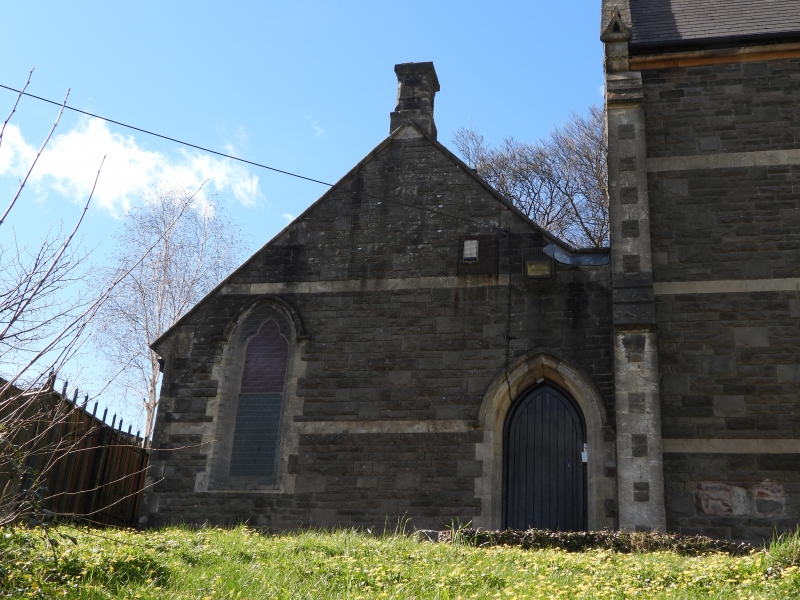 Location: Situated at the S end of the historic village core in a triangular open churchyard shaded with conifers, the burial ground sited opposite on the other side of Bethania Row.

First chapel built 1820; present chapel built 1870; first part to be opened was the small building at the S end; architect HC Harris at 18 years old. Cause established in late C18 with meetings held at various sites in the village including in a building named Chapel House, opposite the present chapel and near a field where John Wesley is reputed to have preached: Bethania Row still retains early - mid C19 rows of cottages, albeit altered, and a separate cemetery; Blanche Evans the main contributor to the first chapel. Building shown on this site though at right angles to present alignment on Tithe Map of 1846. Called Bethania Welsh Calvinistic Methodist Chapel on OS map of 1880. Formerly fronted main road into Cardiff, itself the site of a Roman road, before a new stretch of road was built in C20 and by-passed it.

Small chapel in Gothic Revival style. Of coursed rockfaced stone, snecked to side, with ashlar dressings, the two types of stone treated decoratively in a modest way; artificial slate roof. N gabled entrance facade of 3 bays has at centre a large 3-light geometric window with quatrefoil tracery with narrow hoodmould and decorative voussoirs; above is a louvred quatrefoil in apex; below is a wide moulded pointed- arched doorway with nook shafts, flanked by buttresses with stone-tiled offsets; to each side a trefoil-headed lancet, diagonal buttresses at corners; plinth. E and W side elevations each have 5 bays separated by full height buttresses with offsets, with a blank bay at each end and a tall wide trefoil-headed window under a pointed arched hoodmould in the 3 intermediate bays, ashlar banding. Large round window in S gable end with quatrefoil tracery and decorative ashlar and rock-faced surround, small quatrefoil apex opening above. Attached at S is a lower cross wing; E gable end has a corniced stone stack on verge, a single light trefoil-headed window to left and a pointed doorway to right both with hoodmoulds; W gable end has further stack, 2 single-light trefoil-headed windows and small plaque inscribed: "Bethania Calvinistic Methodist Chapel built 1820 removed and rebuilt 1870."

Interior substantially altered, converted into 2 rooms by insertion of floor; rear gallery balusters retained and some other woodwork re-used; upper floor has a later C20 boarded ceiling below a similar earlier higher ceiling still in situ, the corbelled responds to the trusses visible beneath. No staircases from front lobby, new staircase at rear.

Included as an early work in Gothic Revival style by the exceptional local architect, HC Harris, within the historic core of St Mellons village.