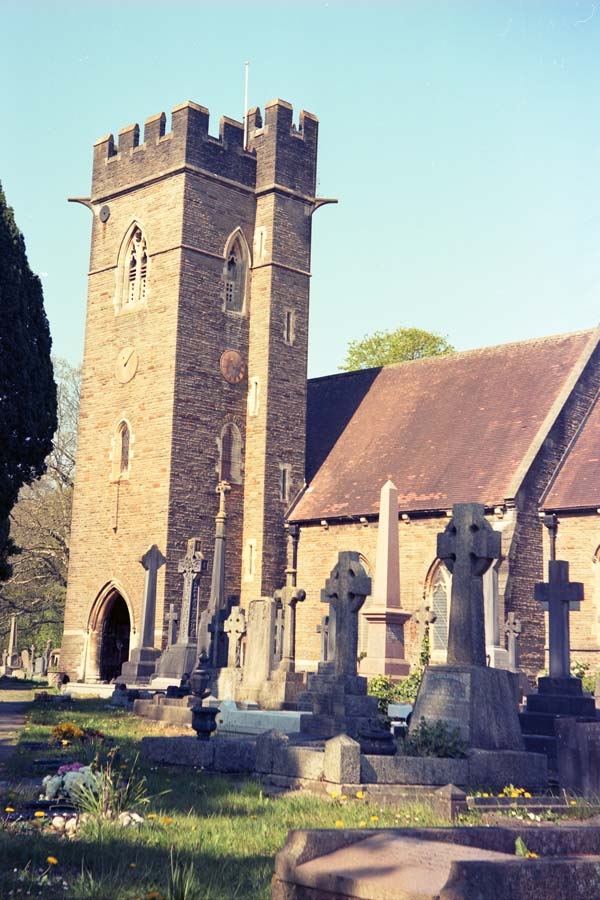 Location: In the centre of the Community at the junction of Church Road, Merthyr Road and Penlline Road.

1882-4 by J Prichard, the Llandaff diocesan architect. In Gothic style and similar to the same architect's St Catherine's Church, Kings Road (qv Riverside Community). North transept added 1920 as a memorial to WWI by G E Halliday, also the vestry. Whitchurch became a parish in 1845, it had previously been a chapelry of Llandaff. Previous to 1884 the parish church stood about 300m north-east of the present one. This was demolished in 1904 and the site is a memorial garden in Old Church Road.

The church is faced externally with Pennant sandstones of dark brown, pinkish and occasionally red colours all laid in regular courses, but rock faced, Bath stone dressings; sharp angles; battered bases to walls, plain tile roofs. Three bay nave; lower chancel; south-west tower with internal porch; no side aisles; added north transept, and vestry to chancel. Decorated style nave windows of 2-lights in 2-centred heads; south-west nave window of 4-lights, tracery with trefoils, quatrefoils and sexfoils. Chancel window of 3-lights in east gable and single and 2-lights in the south wall. Vestry also with gable end to street; 3-light window with rectangular heads. North wall with two square headed windows and two arched doors to the vestry and two windows to the nave as before. Tall 3-stage tower with embattled parapet and taller stair-turret at north-east corner with a small Caernarvon arch entry at the base. Porch with 2-centred entrance in base of tower; above this, single light cusped headed window, then circular clockface, then 2-light cusped headed louvred opening and finally string course below parapet, these openings are repeated on the other faces.

Included for its architectural interest as a little altered church by John Prichard, the diocesan architect of the period.