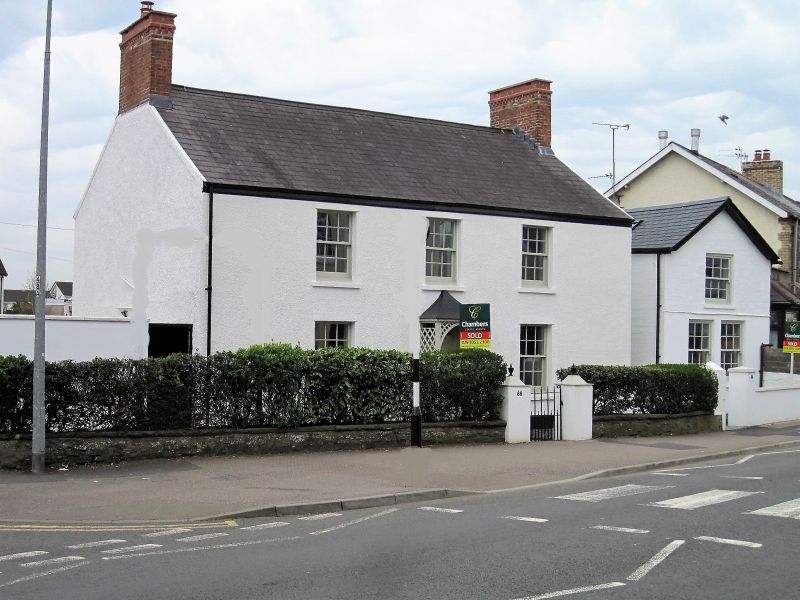 Location: Immediately opposite to Tabernacle Chapel and about 300m south-east of the Church of St. Mary.

A house dating from c1800 which has not been altered externally. The iron caps on the gatepiers (qv) may suggest that this house was the Manse for the Tabernacle Chapel opposite, which has the same feature, until the adjoining Manse was built.

The house is roughcast rendered, probably over rubble stone, with a Welsh slate roof with red brick stacks. Two storeys. three bays, central entrance double depth plan, with rear service outshut. Central doorway with trellised porch with tented roof; rectangular fanlight with tracery; three panelled door. Sash windows with glazing bars, 6 over 6 panes, and stone cills. Plain gabled roof with end stacks. Gable elevation is blind. Rear elevation has a 3 over 6 pane sash on the upper floor and a small two storey outshut on left. To the right of the house is a small gabled building, once the stable but later altered to a shop. It retains the doorway with ventilator over and the hayloft door above.

Interior not seen at resurvey (November 2001).

Included as a small unaltered house of c1800 having group value with the Tabernacle Chapel opposite.