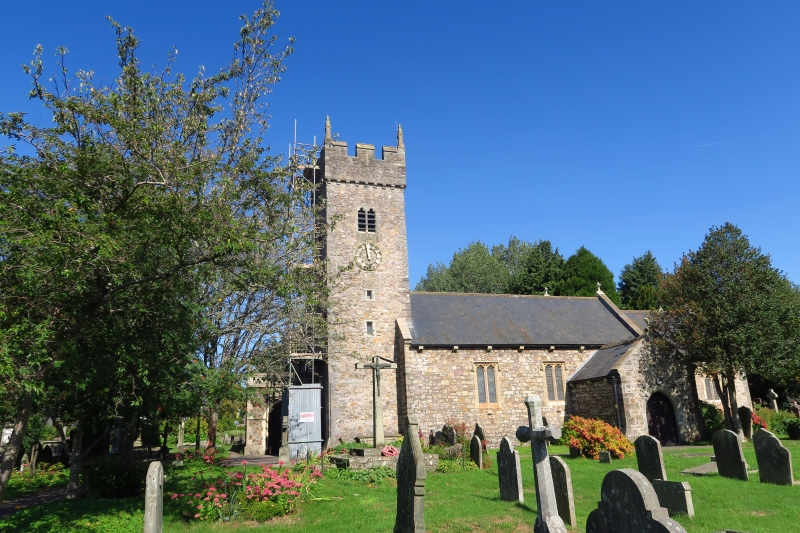 Location: Set in a large quadrangular churchyard in the centre of the village, on the corner of Station Road and Heol Hir.

The Church is first mentioned in documentary records in the C12 and was a chapel of ease to Cardiff St Mary. It consisted of a nave, chancel, W tower and S porch. A section of the S chancel wall, including a single lancet, may be the earliest part of the surviving church. The Sanctuary N and S windows are Decorated and C14, the chancel arch of similar date, whilst the tower and E window are Perpendicular. There is said to be a relief carving of the Crucifixion in the S porch dating to the C15.
In the C19-20 the church was much enlarged and the medieval nave and chancel became the S aisle and chapel, respectively. The first enlargement was undertaken by Prichard and Seddon in 1854, when they added a N aisle and inserted an arcade. The church is shown in this form on the Ordnance Survey of 1875. The aisle was demolished in 1907-8 by the architect, H D Blessley, and replaced by a new nave, chancel and N aisle. The N arcade was built to match the S arcade of Prichard and Seddon. A vestry was added in 1927. The church furnishings are Victorian or later; the reredos in the chapel, of 1903, is by Halliday and was carved by Clarke of Llandaff.

Nave, chancel, S aisle and chapel, S porch, SW tower, W porch, N aisle and vestry. The medieval parts are constructed of rubble sandstone and limestone, the early C20 fabric of multicoloured stone in a ragstone effect, all under slate roofs, with cross finials to gables. Narrow 4-stage unbuttressed tower with splayed base and corbelled battlements with pinnacles to angles. To W, doorway with chamfered pointed arch containing a planked door. A large irregular stone above may have carried an inscription. Small rectangular lights to 2nd and 3rd stage with ovolo-moulded jambs. Paired belfry openings to 4th stage, each with a trefoiled head, and with a central colonnette. Similar belfry openings to N, S and E sides. Rectangular light to 3rd stage of E side; smaller rectangular lights, possibly stairlights, to S side with replaced sills and lintels. A clock is mounted on the wall above them.
The former nave, chancel and S porch of the medieval church have battered walls and corbelled eaves. Three-bay former nave (now S aisle) with porch to R and replaced 2-light windows to L and centre in Perpendicular style; the windows have flat heads with hoodmoulds, the lights with cinquefoiled heads. Gabled S porch with chamfered pointed-arched doorway containing planked double doors. The former chancel (now chapel) is lower and slightly narrower. Single lancet with hollow moulding to L; pair of trefoiled ogee-headed lancets to R with incised spandrels and roughly square head, under a shallow relieving arch. E end has 3-light Perpendicular window, the lights with cinquefoiled heads, and a hoodmould with diamond end stops.
The early C20 parts of the church have Bathstone quoins, corbelled eaves and Perpendicular-style windows. Tall wide nave and chancel, the latter advanced to the E end. Three-light E window with cinquefoiled ogee-headed lights; hoodmould with ball flower end stops; continuous stepped sill band. To R return, 2-light flat-headed window with cinquefoil-headed lights and 4 small circles above. Narrower N aisle, E of which is a single-storey flat-roofed vestry with moulded stone cornice. Flat-headed windows with cinquefoiled lights to E and N. North aisle has 3-light E window, the lights with trefoiled ogee heads, and diamond end stops to hoodmould. Small louvre with sill to apex. The N side of the N aisle has 4 x 2-light Perpendicular-style windows as S aisle. Buttresses with offsets to L and R, L of which is a shorter similar window. To its L is a doorway with 4-centred arch and heavy moulding containing a planked door.
Two-gable W end with tower adjoining to R. West end of N aisle has 3-light Perpendicular-style window as E end; truncated stack? to R. Nave has 4-light window in Decorated style with trefoiled ogee-headed lights, below which is the single-storey flat-roofed W porch. This has openwork stone parapets with trefoil frieze and pinnacles to angles. Pointed-arched doorway to S, the hoodmould with flower bosses, containing double planked doors. Flat-headed 3-light window to W and similar 2-light window to N, both with cinquefoiled heads.

Four-bay arcades to N and S aisles; shallow pointed arches with several orders of mouldings on short shafts of quatrefoil plan, with ringed capitals and bases. Chancel arch in similar style on short shafts with foliage capitals. Boarded and panelled wagon roofs with decorative bosses. Aisle windows with splayed reveals and sills; segmental stone head to W porch. Medieval chancel arch (between S aisle and chapel) is shallow with 2 orders of chamfers dying into chamfered imposts. Doorway to tower has segmental head of narrow voussoirs containing a door with pierced quatrefoils. An original Decorated window on N side of former Sanctuary is retained internally, and has 2 trefoiled ogee-headed lights under a later segmental head with original relieving arch of voussoirs.
C19-20 church furnishings including pews to nave and aisle with shaped foliate bench ends. Octagonal wooden pulpit to L of nave with blind arched panels with cusped ogee heads, and openwork above. In the N aisle is a screen to the vestry in a similar style. Bronze reading lectern to R. Chancel with diaper marble floor and choir stalls with decorative fronts, probably C20. Highly decorative stone reredos with 2 tiers of blind arches with cusped ogee heads and pinnacles. Behind the altar are 3 cinquefoiled arches with ballflower ornament which together contain a painting of the last supper. These are flanked by statues of angels in niches with ornate canopies. To their R are 2 niches containing a piscina and sedilia in the same style.
Octagonal stone font to W end of S aisle with pierced motifs including quatrefoils and flowers, on an octagonal stem and stone plinth. A brass tablet records that it was donated in 1872 by the Wilson family of Abergavenny. Rood screen under medieval chancel arch with ornate ogee and cusped openwork.
Chapel has encaustic tile floor and C20 choir stalls. Pink marble reredos by Halliday with foliate frieze to top; immediately behind altar are 3 niches under a cusped ogee canopy with pinnacles. The niches contain reliefs in white stone, Christ to centre flanked by angels.
There is much stained glass in the church, all early C20, and including the following: Chancel E window, Noli me Tangere, 1908. To L of chancel, World War I memorial depicting St Chad, by Hardman & Co. Further World War I memorials to W end; including to nave by Morris & Co., 1920. In chapel, Crucifixion to E window; nativity and Christ the good shepherd to S. S aisle L, to Martha Maria Lewis (d. 1924), by Kempe & Tower. To R, Suffer the little children, to William Henry Lewis (d. 1905) by Jones & Willis. To N aisle, the glass is by Powell's, Clayton & Bell, A L Moore & Son, and Heaton, Butler & Bayne.
There are also many wall monuments. These include plain marble tablets in the chancel to William Nicholl (d. 1756) and his son-in-law, Thomas Williams (d. 1810). Urn with drape on grey marble background to Marianne Jones (d. 1821) and her husband William. To S wall, from L, casket-shaped tablet to Wyndham Lewis of Green Meadow (d. 1838), and William Price Lewis of New House (d. 1840). Square tablet above with scrolled cornice to Margaret Knight (d. 1809) and her relatives. Plain tablet on corbels above, to other members of the Lewis family, and to R further similar tablets to the Jacob family, and to John Williams of Fair Oak (d. 1795). The N aisle has, from L, a casket with urn to Samuel Lewis (d.1814). To centre, a monument with pilasters and open pediment to Thomas Lewis of New House (d. 1764). To R, monument depicting a seated woman in grief, to John Lewis (d. 1850), also of New House and erected by his widow. This is by John Evan Thomas, a pupil of Chantrey.

Listed grade II* for the retention of the medieval church and tower, notwithstanding its incorporation into a much larger C19-20 church. Other features of interest include the arcade by Prichard and Seddon and the reredos by Halliday.