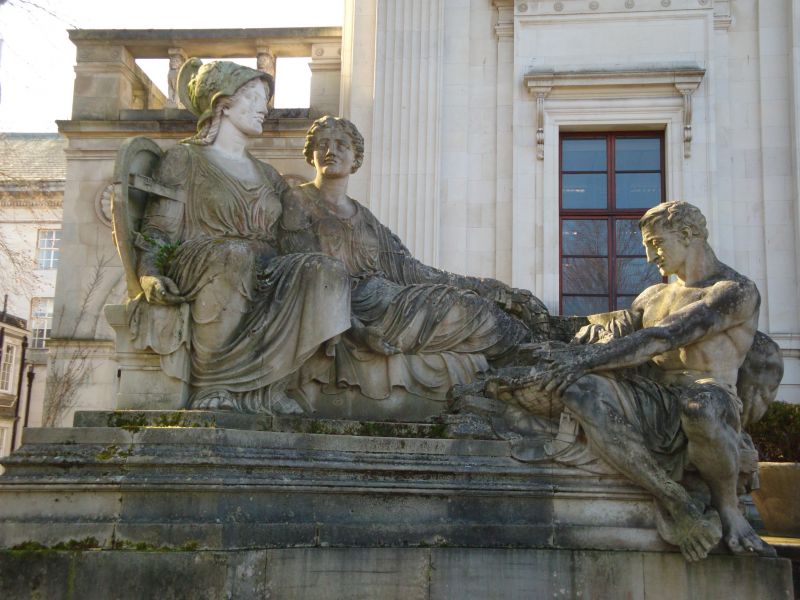 Location: Between Bute Building (N) and University Registry (S), with extension backing on to registry.

Cathays Park was purchased in 1898 by the Borough of Cardiff from The Third Marquess of Bute at a cost of £160,000 and developed as a civic centre to a layout by William Harpur. Cathays Park was developed over three-quarters of a century to become the finest in Britain reflecting Cardiff's status as city and eventually taking on a national importance as civic centre of the capital of Wales. A competition for Glamorgan County Hall was held in 1908 and won by E V Harris and T A Moodie; the building opened in 1912. The building's Portland stone facing, and monumental Classical style follows the pattern for other buildings in Cathays Park. In 1932 a large block was added to SW, attached by a bridge; the architects were Ivor Jones and Percy Thomas, some extensions in inner courtyard of 1950s and later. County Hall forms an essential part of Cardiff's civic centre, the finest in Britain.

Graded I as amongst the finest examples of Early C20 civic architecture in Britain with ambitious exterior and extremely interesting interiors, all virtually unaltered. The interior is remarkable not only for its refined architectural spaces but for the survival of fittings including panelling, integral seating to council chamber etc.
Part of a group of exceptionally fine public buildings in Cathays Park which form what is certainly the finest civic centre in Britain. In addition to its architectural interest, the building and its setting express Cardiff's claims to be a city of international importance at the peak of its economic power.