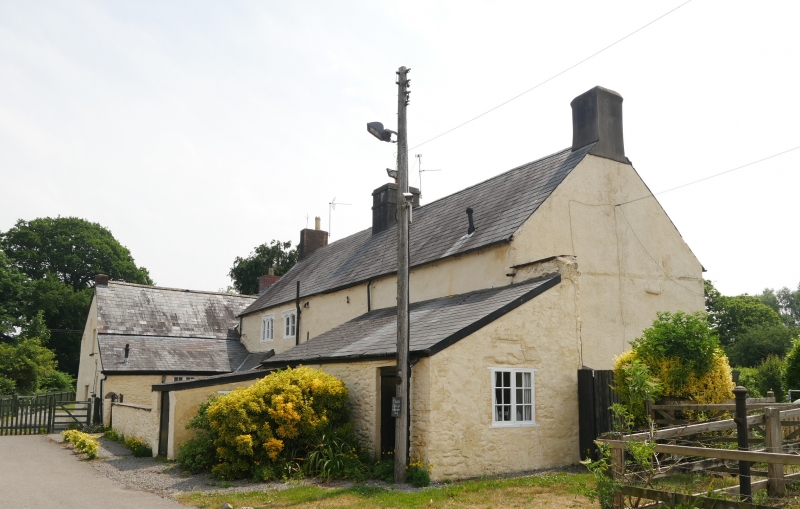 Location: E of Morganstown, close to the River Taff, reached by a track crossing the railway from the main road

C16, mainly unaltered. Recorded as being built for Hugh Lambert - described as a Frenchman - a Wealden ironmaster from Tonbridge in Kent who was brought into the area by Sir Henry Sidney who set up a new ironworks and forge at the Pentyrch site near the Garth in 1564. Some probably C19 remodelling including creation of landing, straightening stairs, raising ceiling in main bedroom. More alterations were made to the cottage but the blocked or fragmentary early features that survive externally are similar to those of the main range. The inner room attached to hall was formerly used as cool room and larder with slabs and shelves and at one stage open over two storeys. At one stage the property was part of Ty Mynydd holding. In mid C20 the house was centre for a market garden with ranges of glasshouses; orchid houses were near the house on S side.

Farmhouse and attached cottage with attached farm range. Farmhouse has cross passage; end and centre chimneys with adjoining stairs; original window openings. Stone walls limewashed externally, Welsh slate roof with brick or rendered end stacks and main central ridge stack. S elevation of main house is of eight bays and retains almost all its original windows which comprise 4-centred headed lights, mostly paired some triple or single, with spandrels and square headed hoodmoulds and a single horizontal glazing bar. From W to E, first bay has a window of two lights to each floor. Second bay projects slightly with small slate hood with 3-light window to each floor. Third bay has a single light window on first floor and one of two lights below. Fourth bay has a small staircase window adjoining centre fireplace. Fifth bay has roof extending over a porch with doorway with four-centred head in moulded square-headed surround with carved spandrels incorporating shields, very decayed jambs and stops and old ledged door with cover strips, iron hinges and knocker. Sixth bay has blocked single light first floor window and a blocked window below. Seventh bay has 2-light first floor window and an inserted ground floor casement window with brick dressings but retains hoodmould. Eighth bay has blocked windows at two levels to internal stone stair. W bay of Gelynis Cottage has a doorway with brick dressings but with chamfered stone behind, second bay has casement windows with brick dressings to each storey. Stepped back at end is the stable wing with ventilator openings.
N elevation of Gelynis Cottage has a cross-wing; in gable end wall there is to left a small blocked window with hood, other later casements similar to S side and further blocked earlier features; pigeon-holes at N end of each side elevation; later lean-to scullery wing against W side elevation. Attached to left (E) is the former stable wing with wide openings with brick dressings on each floor. Rear elevation to main house also retains original 3- and 2-light windows at first floor level to left and a small single light at end of cross passage with later half-hipped roofed porch adjacent to left; inserted ground floor casement to hall with lean-to former dairy adjacent; further pigeon-holes in S-facing wall.

Interior plan of cross passage separating kitchen (E) from hall (W) which has chimney backing onto entry and inner room on far side; cottage attached to kitchen at E. Cross passage has attached porch at S and window at N, thus this latter entry is deflected to NE through a later porch which has boarded dado and settle; hall wall fronting passage is heavily battered. Hall has heavy chamfered cross beam with broach stops and retains ceiling. Large open fireplace has moulded jambs and replaced lintel; stairs beside no longer curve behind but are straight following a remodelling which provided a first-floor landing. Bay window of 3-lights with deep splays identified by RCAHMW as formerly lighting dais, with second window by stairs. Boarded dado and some doors, old cupboard in N wall with wide boards; former shutters; flag floor. Small inner room now kitchen with blocked fireplace is up steps to W. In former kitchen to E the original fireplace is blocked with a smaller later version inserted; no stairs beside now but some traces visible; one chamfered cross beam; wooden floor with air gap below.
Upper chamber above hall, the main bedroom, shares the same bay window as hall, plus a smaller window adjacent; it has fine probably late C17 panelling, incomplete and off the room a small balustraded recess believed to be for cheese storage. Along rear passage into NE end room above former kitchen, a further now blocked passage gives access to cottage; chamfered and stopped beam. Attached cottage is used for storage; outer lean-to with boiler has covered the pigeon-holes in S facing wall; two fireplaces in N ground floor room; S room up 2 steps gives access to former stairs of E room of main house which continue through 2 storeys and can be traced on SE elevation by the two blocked staircase windows. A-frame roof believed to survive and owner reports that attic although unlit was formerly used as servants' quarters; stone slates from previous roof covering visible.

Listed II* as 'one of the most completely preserved early vernacular houses of the county' (Newman).