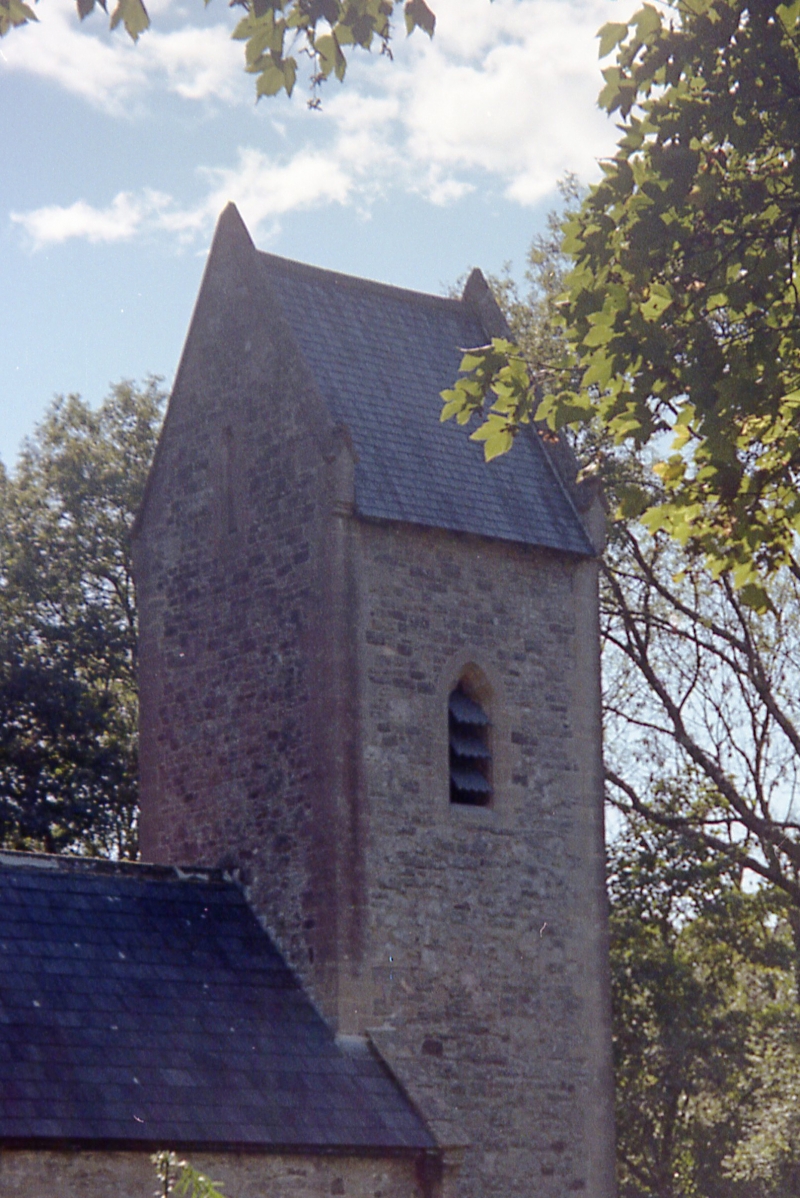 Location: Off the road south from St Fagans and about 1000m from the Church of St Mary the Blessed Virgin.

Late C12 or early C13 foundation. Present structure comprises a small church with fabric possibly of C13 origin but restored in 1863-4 by David Vaughan in the Lancet and Geometrical styles. The restoration was paid for by Mrs Charlotte Treherne. The church was rearranged and refurnished by F R Kempson in 1908. The parish of St. Michael-super-Ely was joined with the parish of St. Fagans in 1968. Electricity was introduced and the church was redecorated in 1969-73.

Built of local red sandstone and lias with cut stone dressings, Welsh slate roofs. The stonework is mainly roughly squared to random rubble with some early herring-bone at the base of the north wall of the nave. The Victorian stonework is more carefully squared and rock-faced as can be seen in the new work of the entrance face of the south porch and the top of the tower, but there is much refacing in other walls also.
Nave, chancel, west tower with saddleback roof, vestry, south porch.
The south wall of the nave has a trefoil headed light to the west of the porch. Steeply gabled porch with the face and the roof rebuilt in the mid C19, buttress and coped gable, cross finial. The porch retains stone seats and the inner doorway to church with segmental pointed arch with chamfered mouldings. Next a small gabled south transept with gable as before, window with two trefoil headed lights and a quatrefoil above. Nave and chancel gables are both coped and with cross finials. Two trefoil headed lights to the south wall of the chancel, oval memorial between. East window of 3-lights with sexfoil above. North wall of chancel has a trefoil headed light and a large Tudor type arch infilled in brick; this was inserted by F R Kempson in 1908 and was to form the entry to a vestry, but this was never built. The nave has a trefoil headed window and a 2-light Perpendicular window with dripmould over. The tower is roughly square in plan with sandstone quoins right to the top. The Victorian stonework of the upper stage has been matched to the lower section. Three stage tower with saddleback roof (the previous lower tower also had one). Ground stage with Victorian doorway and door. Intermediate stage with slit window on west wall. Bell stage (C19) with louvred trefoil headed opening on north and south faces; slit window in east and west gables above. Coped gables with kneelers.
A ledger-stone commemorating the diarist William Thomas (d 1795) is on the exterior wall near the south of the chancel.

The floor level rises in stages to a height of six steps from the west door of the tower to the altar steps. There is a medieval doorway in the east wall of tower, about twelve feet above the nave floor. The evidence suggests that this was originally the only entry to the upper floors of the tower, thus giving it a possibly semi-defensible purpose in the Middle Ages. West end of nave retains stone wall seating, a rare survival of pre-bench seating within a church. Old timber-framed roof of five bays. All furnishings and the tiled flooor are Victorian and later. Medieval font on modern base. Medieval stoup inside entrance from south porch. Memorial of 1546 referring to 'Pentre paen' (see Pentrebane Farm under Pentrebane Road). In the vestry there are four C18 gravestones of the Lewis family, partly of Rhydlaver or Rhydlafr and also an alabaster tablet inscribed in Welsh. The east window is dated 1856.

Included as an interesting medieval church with a very thoroughgoing Victorian restoration by David Vaughan.