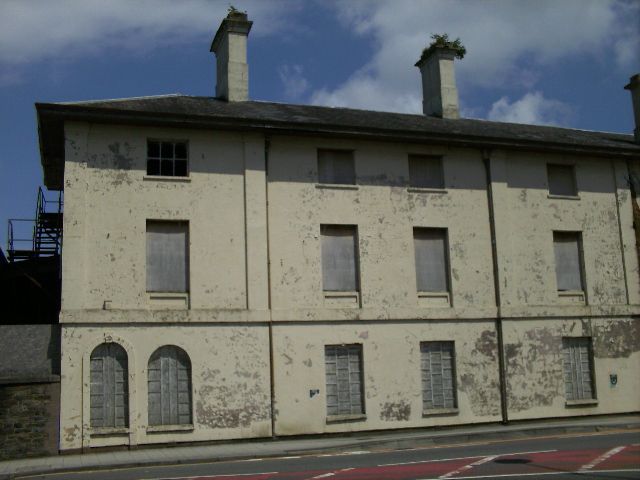 Location: On exposed corner site with long side parallel to Bute Street

Built as offices for the Taff Vale Railway, and first used in 1843, but southern section apparently an addition of 1860's. Following construction of new offices at Queen St in 1862, the building was let as consulates (and known as 'Consulate Chambers'), but with waiting room and ticket office in southern section. Adapted as station in early C20, following closure of old Cardiff Docks Station, formerly on the E side of the tracks.

Stuccoed walls. Hipped slate roof with deeply overhanging eaves. Tall stuccoed chimneys with classicising cornices, northernmost 2 chimneys at right angles to road, others parallel. Bute Street facade in two sections, northern of 3 storeys and 4 bays, articulated by banding and pilaster strips. Second floor has 4 almost square windows set close to eaves, central pair are grouped closer. First floor windows are set deeply with panelled aprons below. Band course at this level continues round building. On ground floor, windows follow line of those above, and have stone sills but northernmost is round headed. To left (N) of this window is round headed doorway with architrave and keystone. Southern section of storey has group of three large tall windows (small pane sashes) with moulded architrave supported on brackets and bracketed cornice above. On ground floor 3 windows grouped together, central window blocked, R window without architrave (apparently blocked doorway). To L of windows, round-headed doorway similar to that at N end of facade. Elevation facing S has two storey semi-hexagonal bay with pierced parapet above. Each face of bay has window on each floor, each surrounded by moulded architrave on small brackets.

Ground floor altered for use as Railway Museum.