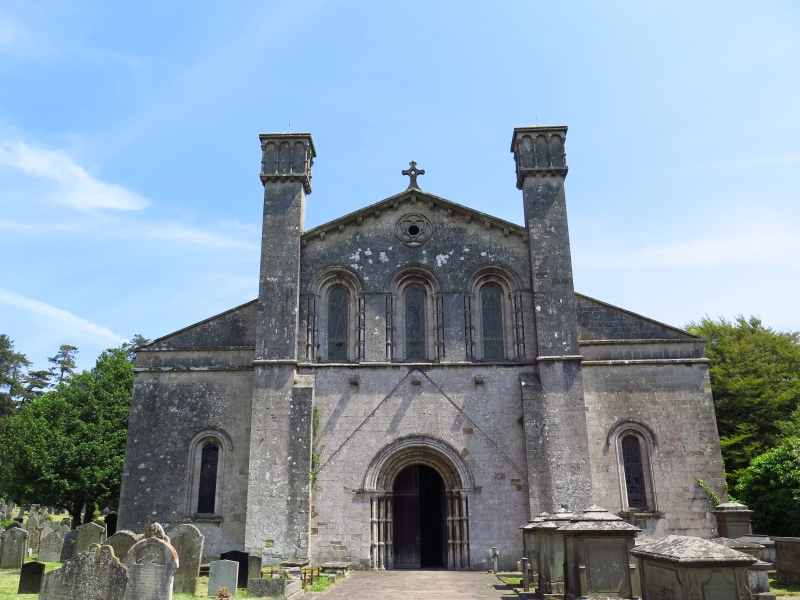 Location: Located at the end of a short lane which runs NE off the A48. The Stones Museum is within the churchyard. The S doorway faces into Margam Park.

Robert of Gloucester, Earl of Glamorgan, granted lands for the foundation of a Cistercian Abbey at Margam in 1147. This replaced an earlier religious foundation in the area, represented by a large collection of early Christian stones. Most of the nave of the C12 abbey church survives and is now the parish church. The rest of the abbey church and the remaining monastic buildings were rebuilt in Early English style in the early C13, probably in 1203-13 under Abbot Gilbert. These structures are now ruined.
Margam Abbey was dissolved by the crown visitors of Henry VIII in 1536-7 and the monks evicted. By 1540, Sir Rice Mansel (1487-1859) of Oxwich and Old Beaupre had acquired most of the former monastic lands. He built an impressive Tudor house, incorporating some of the monastic remains into the service areas. The abbey church was partially retained: the nave was originally 8-bay, but Mansel built an E end wall across the western 6 bays to form the parish church. This wall may have replaced a screen in front of the choir, which had been rebuilt in Decorated style. A very fine collection of Renaissance tombs belonging to the Mansel family can be found in the S chapel, with further tombs in the N chapel.
By the late C18, the church was becoming ruinous due to lack of maintenance. It is shown in a sketch of 1803 with low aisles and a 2-storey belfry chamber to the N. The W end was essentially Norman except for a bellcote rising from the gable apex. In 1805 Thomas Mansel Talbot agreed to a restoration, which was partially funded by the parishioners and was complete by 1810, having cost £6,500. The gable of the W end was rebuilt and the buttresses flanking the nave were raised in the form of campaniles. A new roof had a shallower pitch and the bell-cote on the apex was replaced with a finial. The aisles were replaced and were pierced by large round-headed windows, and the E end was rebuilt with square turrets. The interior was refurnished at the same time, but most of the church furniture dates to a subsequent restoration of 1872-3 overseen by Theodore Talbot. This included new seats, ceiling and pulpit.

Nave and chancel in one with flanking lean-to aisles. Constructed mainly of Sutton stone, with renewed slate-covered roofs. The W entrance front retains much Norman fabric, but the remainder is early C19, in Romanesque style. The W front has a central entrance under a round arch with 3 orders of roll mouldings, the central one with cable decoration. Supported on detached circular shafts with 2 rings each, bell capitals and square abaci. The capitals have varied decoration, mainly fluting and scallops to the L and foliate decoration to the R. The doorway, with double planked doors, is set within the scar of a pitched roof which belonged to a former porch. High above is a moulded sill band, beneath which are 3 corbels which may relate to a lean-to porch, common in Cistercian abbeys. Three single-light round-headed windows each with 2 orders of roll mouldings above sill band. Narrow detached circular shafts with 3 rings and bell capitals, mainly with fluted decoration. The shafts of the windows and doors appear to have been enhanced with rings in the early C19. Circular vent in gable apex surrounded by interlaced tracery within a blind circular panel. The shallow pitched roof is supported on decorated modillions and the apex bears a cross finial. Shallow clasping buttresses to angles of nave, raised above sill band level in the C19 to form square turrets with decorative capitals supported on corbels. Each face bears a frieze of blind round-headed arches with ringed shafts and foliate capitals. There are 3 arches to the W and E sides, and 2 to the N and S. Shallow pyramidal caps.
The aisles, mainly rebuilt in the early C19, have shallow lean-to roofs. The sill band continues across from the nave, with a further band at eaves level. The end of each aisle contains a single-light round-headed window with continuous roll moulding under a hoodmould. The N side has 6 identical window openings faced in Quarella sandstone respecting the 6 bays of the church, but that to the W is blocked. Tall round-headed windows containing plate tracery. Pierced by 2 round-headed lights and a roundel, all with diamond quarries. Two orders of roll mouldings to openings with narrow circular shafts with 3 rings and decorated bell capitals. Single shaft without rings between the 2 lights.
The E end is entirely early C19. Stepped 3-light window with continuous sill band. Two orders of mouldings to each round-headed light, ringed shafts and decorated capitals. In the apex is a circular vent with interlaced work as at the W end. Roof supported on decorated, mainly foliate, modillions and cross-finial. Clasping buttresses rising to turrets to match those at W end, but with different heads: Projecting flat stones on decorated corbel table, surmounted by capitals with 3 blind square panels to each side with pyramidal caps. Aisles as at W end with blind round-headed window openings with 1 order of continuous roll mouldings and a hoodmould. The S side is 6-window, the detail as N side. Round-headed doorway after 4th window from W end, in same style as windows and containing a C20 panelled door with overlight.

Six-bay Norman arcades: plain cruciform piers and round arches with chamfered impost band and relieving arches. Aisles have C19 quadripartite vaulted roofs to each bay. To the W of the N aisle are the remains of 3 blocked clerestorey windows with quoins. Aisle windows within high blind arches. The 3 round-headed windows above the W door have steeply raked sills and narrow roll mouldings. Shallow pitched timber-panelled ceiling to nave and chancel, supported on corbel table. Flagstone floor, except around benches where it is wood planked Wooden benches with carved ends with quatrefoils. Chancel separated from nave by 2 steps and ornate iron railings with scroll-work and large fleur-de-lis finials. Reredos of pink marble with a blind arcade of round arches. Half-glazed Gothic screens with intersecting tracery divide the chancel from the chapels at the E ends of the aisles.
The Mansel chapel in the S aisle contains 4 large marble chest tombs, each bearing 2 or 3 recumbent effigies. The 3 aligned tombs to the E are contemporary, and date to the period 1611-31. They are dedicated to Sir Rice Mansel (d. 1559), Sir Edward Mansel (d. 1585) and Sir Thomas Mansel (d.1631) and their wives. The children of the deceased are depicted as free-standing weepers, sons in alabaster to the ends, and daughters in stone, mainly to the sides. Obelisks project from the top angles of the tombs. The tomb set back to the W is later and has no weepers. White alabaster and black marble, with recumbent effigies of Sir Lewis Mansel (d. 1638) and his wife. Decorated in classical style with festoons, books and shields. Marble wall monuments to other members of the family. On E wall, a memorial to Rauleigh Bussye, stepson of Thomas Mansel, and his wife: Two figures at a prayer desk between Corinthian columns supporting an entablature with heraldic emblem rising above. To the S wall, a woman praying within a round arch, to Katherine Bussye (d. 1625 aged 17).
The N chapel contains a single prominent tomb in the centre to Theodore Mansel Talbot (1839-76) who tragically died in a hunting accident. By H H Armstead and dated 1881. A recumbent and life-like effigy in a nightshirt holding a crucifix under an Early English-style gabled stone canopy. Supported on black marble columns with foliate capitals forming 3-bay arcades with moulded trefoil-headed arches. The canopy has tall gables to each bay and to the ends, with blind trefoiled arches and surmounted by pinnacles. Decorated with angels, shields and head bosses. Against the E end, an almost full-height marble wall monument, after 1711, to Thomas Mansel (d. 1705). Four marble pilasters on a plinth supporting a cornice and triangular pediment. Between the pilasters, recessed tablets record the history of the Mansel family. Heraldic emblems in centre of pediment. In front, a plain marble chest tomb dedicated to Thomas Mansel Talbot (1747-1813), and his 2 daughters, Maria Theresa and Eleanor. To the S is a wall monument to Christopher Rice Mansel Talbot (1847-1894) and his daughters, Emily Charlotte and Olivia: A rectangular tablet between pilasters decorated with festoons supporting a swan-necked pediment from which a shield rises.
The font is part of the restoration of c1810, of pink-grey marble from Caen. Bowl with dog-tooth frieze to rim, pink marble stem and tiered stone base. The polygonal pulpit is of Caen stone but dates to the restoration of 1872-3. Decorated with blind round arches and coloured marble inlay and on a red marble stem. Ornately carved mahogany choir stalls with Romanesque detail including arcades, by William Clarke of Llandaff, 1904. These were a gift of Emily Charlotte Talbot in memory of her sister, Olivia (d. 1894). Organ in 4th bay of N arcade, rebuilt by Emily Talbot in 1903.
Stained glass: W end lights designed by Burne-Jones and made by Morris & Co, 1873; Madonna and child to centre flanked by St David and St Bernard. W end of S aisle; memorial to Maria Theresa, eldest daughter of Thomas Mansel Talbot (d. 1861). East end lights have colourful stained glass of 1904-5 by Sir William Lawrence and made by Powell's. They depict Christ, the annunciation and St Michael.
Grave stone below W window of N aisle, to John Williams (d. 1811), supported on moulded stone fragments. To L of organ, a white marble tablet with swags and books to Rev. William Bruce Knight, dean of Llandaff and minister of Margam parish (d. 1845), signed P Rogers, Swansea. Two bronze plaques attached to piers of N arcade, commemorating those who died in the 1st World War, one to members of the Glamorgan Royal Horse Artillery.

Listed grade I as the surviving nave of a major Cistercian Abbey, restored in the C19. The later additions and fittings are of historic interest for their association with the Mansel and Talbot families of Margam Park, the Renaissance tombs being of particular interest.
Scheduled Ancient Monument: GM005 (NEP).