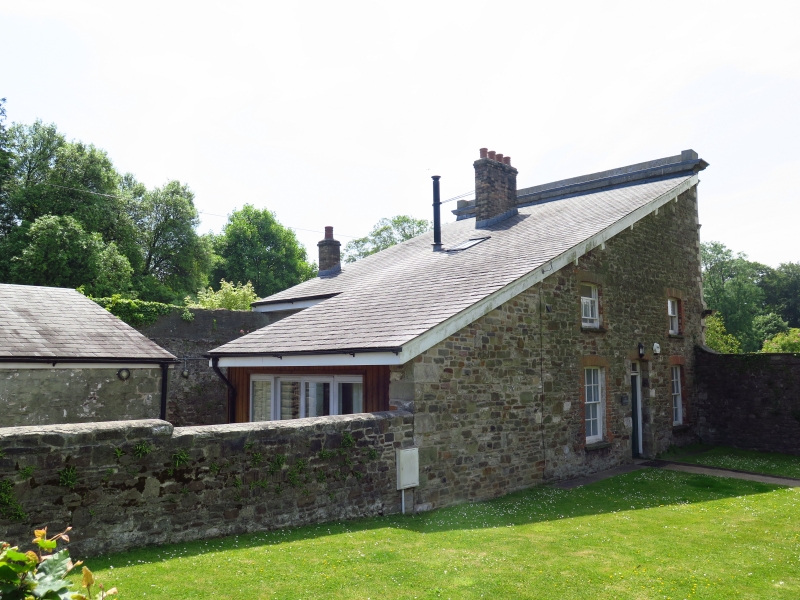 Location: Located along the N boundary of the gardens, N of the Orangery and SE of the kitchen gardens. The facade faces W into the park, whilst the cottage is outside the park boundary.

Jacobean facade in classical style imitating the triumphal arch and with different orders to each storey. Attributed to Inigo Jones, though this is unconfirmed. Originally the facade of a banqueting house located in a prominent and high position at the E end of the gardens of Margam House. It had a square porch with a larger square block behind and is shown in two unattributed C17 paintings and a sketch by Thomas Dineley of 1684. Dineley accompanied the 1st Duke of Beaufort to the banqueting house when he was entertained by Sir Edward Mansel. Margam Castle was built nearby in 1830-5, and the facade was re-erected in a new position in 1837. It faced into the gardens created by Christopher Rice Mansel Talbot and formed the front of a rudimentary cottage, said to have been occupied by a gardener. The statues in the niches are not original and were added in the late C19.

A fine 2-storey 3-bay facade of Sutton stone ashlar forming the W side to a lean-to rubble cottage. The bays are divided by 4 fluted columns, of the Ionic order to the lower storey and the Composite order to the upper storey, both supporting entablatures. Later sandstone parapets. The facade has central round arches, now blocked, flanked by smaller round-headed statue niches. The entablatures have moulded architraves. Moulded plinth, impost bands and sill bands, the latter forming the cappings of the column bases. The decoration is unusually rich and includes egg and dart to the ovolo mouldings of the architraves, impost bands and central arches, sometimes with beading below. Cornices with leaf decoration and dentils. To the lower storey, the keystones to the arches are fluted with Ionic volutes, scrolled to the centre arch. They are in the form of scallops to the upper storey. The keystones continue down the soffits of the niches to impost level, as raised decorated bands. The female statues in the niches are on square bases and are of pre-cast stone.

Two-storey cottage to rear, of rubble stone with quoins under a single-pitch slate roof with 2 brick stacks. Central skylight to roof pitch. Front to N side with symmetrical arrangement of openings. Central panelled door with overlight under a segmental brick head with stone jambs. Flanked by 6-over-6-pane hornless sash windows in red brick surrounds. 3-over-3-pane sashes above in similar surrounds. Second doorway to E end and offset to L; C20 planked door under overlight and flat red brick head. Small 4-pane window above. A boundary wall runs E from the SE angle of the house and forms a small garden. The S side has a 2-light multipane casement in a brick surround to the R. Two small irregular windows to the L, one to each storey.

Listed grade I as a very fine Jacobean facade of exceptional quality which is unique in Wales and has few parallels elsewhere in Britain.