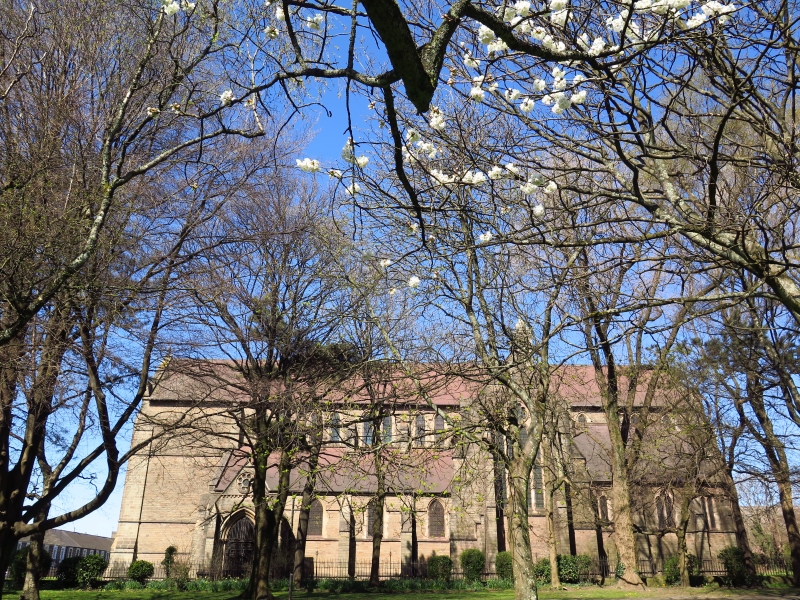 Location: Set within a rectangular walled churchyard, with memorial park to the R and vicarage and mission room to the L.

By John Loughborough Pearson of London and built in 1895-7 at the expense of Emily Charlotte Talbot of Margam Park in memory of her brother Theodore (d. 1876) and sister Olive (d. 1894). The supervisory architect was F Waller of Gloucester, who had also undertaken work at Penrice Castle, the main seat of the Talbot family, and the contractors were J Shillitoe and Sons. The cost of the church was approximately £21,000. It replaced the chapel of ease, now Holy Cross Church, which had become too small for the growing population of Port Talbot.

Early English style. Nave, N and S aisles, porches and transepts, sanctus bellcote, chancel, S lady chapel and N vestry. Lofty nave and chancel with tall lancet windows. The W bay of the nave was intended to be raised as a tower, but this was never undertaken and the bay was roofed over. Constructed of local blue-grey snecked sandstone with Bath stone dressings under tile roofs. Detail includes angle and set-back buttresses with offsets and gablets, moulded plinth and sill bands, continuous hoodmoulds and decorated eaves cornice.

The W end has 3 stepped lancets under a relieving arch, set between angle buttresses, and 2 vent slits to gable apex. The S side of the proposed tower has no openings. The S side of the nave has clerestorey windows above a full-length lean-to aisle. Advanced gabled porch offset to L with angle buttresses with gablets. At the same level is a corbelled band, above which is a large rose window. Pointed arched entrance with 3 orders of chamfered mouldings on 3 attached shafts with rings. Steel gates to entrance. Pairs of windows to each side, 2-lancet with a circle above. The porch has a quadripartite vaulted roof with chamfered ribs, and low side benches. Pointed arched doorway with keeled moulding on attached shafts with ringed dentilled capitals. Double doors set back, with iron strapwork. The aisle has a pronounced SW angle buttress. Single lancet to W end. To the R of the porch are 3 wide lancets separated by angle buttresses. The clerestorey has pairs of tall lancets separated by buttresses. The S transept has set-back buttresses flanking a tall pointed arched window with plate tracery, of 4 lancets with a rose above. Short lancet to gable apex. The E side of the transept has a high-level 2-lancet window.

Apsidal-ended lady chapel partly obscuring S side of chancel which has lancet windows at high level. The lady chapel has 5 windows to the S and E, each separated by a buttress. Plate tracery windows with 2 lancets and a circle. Dressed stone sanctus bellcote above crossing, of square-section with spirelet, angle pilasters and pinnacles. Two flat-headed openings to each side with decorative friezes above and below. The E end of the chancel has 3 tall stepped lancets in heavy mouldings flanked by massive angle buttresses. Smaller buttress centrally placed below sill. The window is under a high pointed relieving arch, immediately beneath which are 2 ornate blind quatrefoils. Pair of vents in gable apex.

To the N, the vestry is in 2 parts. Tall 2-storey gabled bay to R and single-storey lean-to to L. Plate tracery windows with 2 lancets and a quatrefoil. Window to E end of lean-to with added transom, and narrow light offset above. Window to N side, with pointed arched doorway to R with several orders of mouldings. Above the lean-to, the chancel has a single lancet to the L and pair of lancets to the R. A stack rises from the angle of the chancel and the 2-storey bay of the vestry. The face of the latter is set back from the N transept and has a large angle buttress to the L. Two plate tracery windows to ground floor, and tall narrow lancet to upper level.

The N transept has large set-back buttresses without gablets and 2 tall lancets between which is an angle buttress. Cusped light above and 3 stepped louvres in gable apex. The N aisle and clerestorey are as the S side. The advanced gabled porch, offset to the R, is lower than the N porch. Pointed arched entrance with 2 orders of chamfered mouldings on 2 attached shafts with rings. Above is a statue niche with trefoiled head on shafts and foliate moulding above head. It contains a statue of St Theodore. Each side of the porch has 2 quatrefoils within heavy mouldings. Inside the porch is a pointed arched doorway with single shafts, containing double boarded doors. Quadripartite vaulted roof and side benches. The N side of the proposed tower chamber has a tiny stairlight to the R angle buttress.

Fine Early English-style interior faced in dressed Bath stone. The tower chamber at the W end has a vaulted roof, the 4 moulded ribs joining a circle at the apex. Door to far W of N side with pointed arched head. Tall pointed tower arch with 4 orders of mouldings on 4 attached round shafts with ringed capitals and bases. Nave with 4-bay arcades. Double chamfered pointed arches on compound columns with ringed capitals and bases. The 3rd arches from the W end have the most ornate columns, with clustered shafts of different sizes, some filleted. String course above each arcade from which attached shafts rise above the spandrels of the arches. These have ringed corbels and bases, squared capitals and neck rings which continue as hoodmoulds over the clerestorey windows. The clerestorey openings have roll mouldings which continue down to the string course, but below the windows to each side is a blind triforium with round arches, the blockings pierced by quatrefoils. The nave has a 6-bay tie beam roof with collars supported by arched braces. Cusped struts above collar and windbraces. The E two bays, above the crossing, are shorter. Quarry tile floor.

Aisle windows with splayed reveals and sills. Sill band from which short attached shafts rise, supporting the ribs of the quadripartite vaulted roof. The transverse ribs are chamfered, the narrower diagonal ribs with keeled mouldings. Transept arches similar to tower arch with 3 orders of mouldings. The chancel arch is also of 3 orders but is more ornate, the outer order with keel mouldings and dog-tooth enrichment, while the outer attached shafts are of dark grey Purbeck marble. The chancel has a 3-bay quadripartite vaulted roof, the ribs enriched with dog-tooth and supported on Purbeck marble shafts which rise from the string course above 2-bay arcades. These are highly enriched with dentils and dog-tooth mouldings. The S arcade has compound columns, the attached shafts of alternating stone and marble. Two-arch inner arcadings with quatrefoil above the spandrels decorated with flower bosses. Above the arcades are pairs of clerestorey windows, with a single window further E, the jambs with attached shafts and decorated mouldings, and with quatrefoils above the spandrels. Blind triforium beneath consisting of 2 pointed arches on marble columns with dog-tooth enrichment. Similar N arcade, the R arch blind and the L arch containing the organ. Responds of the 3 stepped lancets at the E end are of 3 clustered shafts supporting moulded rear arches with dog tooth enrichment. The outer jambs have 2 shafts of Purbeck marble.

The S chapel has a 3-bay quadripartite vaulted roof with additional ribs to the apsidal E end. As in the aisles, the ribs are supported on short attached shafts which rise from the sill band. Dog-tooth enrichment and dentils throughout. Encaustic tile floor.

Pale marble font to SW of nave by Robert Davison; round bowl in square surround decorated with blind trefoiled lancets supported on 4 grey marble shafts with ringed capitals and bases. Octagonal pulpit of Portland stone with Purbeck marble columns to each angle. Openwork arch to each face, of 2 lights with a quatrefoil above, and with high relief foliate decoration. Narrower base with stylised blind trefoils. Low stone screen in front of chancel with chamfered coping, between which are highly ornate wrought iron gates with scrollwork and tall finials. Similar iron screen to arcade dividing chancel and chapel. To their E, 3-seat sedilia with moulded pointed arches supported on Purbeck marble columns, under high gablets. Choir stalls with blind trefoiled arches to front.

Stained glass: The E windows of the chapel bear angels by Clayton & Bell, given in 1902 and 1904 by Major Thomas Gray and Emily Talbot, respectively. To its R is a memorial to Lieutenant Rupert Price Hallowes VC who died in the Great War in 1915, by Powell's, and depicting the archangels Michael and Gabriel. Two further windows in chapel to the Cound family, depicting heavenly gifts, by L C Evetts, 1970s. The S aisle has 3 stained glass windows, memorials to the David family, by Clayton & Bell (that to the L undergoing restoration). W windows of aisles, to Olivia and William George (d. 1971 and 1978) by L C Evetts and depicting the Virgin as Queen of Heaven and St Theodore. To N aisle, 3 windows by Powell's, 1950s, including acts of healing. The E window lancets depict Christ between St Theodore and St David, by Timothy Lewis of the Swansea School of Art, 1983.

Listed grade II* as a powerful example of the Early English style in late Victorian architecture by a nationally important architect. The largest church designed in Wales by JL Pearson.