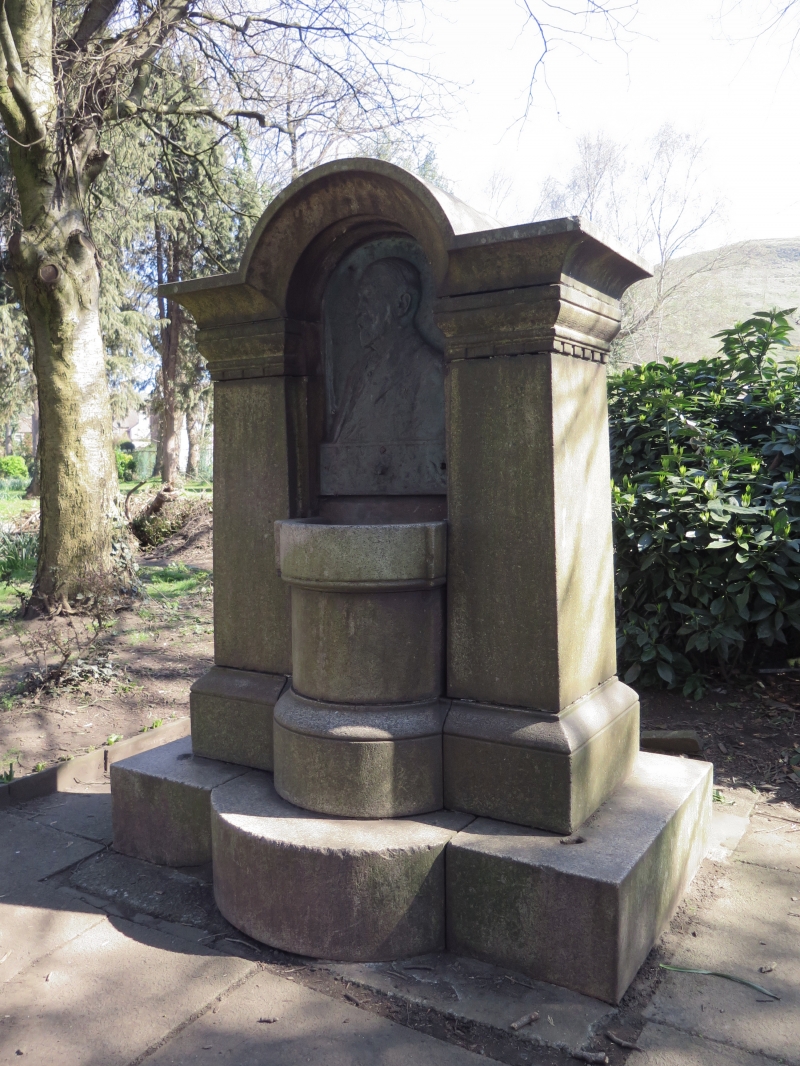 Location: Located to the E of the main avenue and behind the war memorial.

The fountain is in honour of the doctor, John Hopkin Davies, who was brought to Tai Bach in 1872 by Theodore Talbot of Margam Park. Davies practised in Tai Bach for 48 years until his death in 1920 and was much admired by all. The fountain was erected before his death, in 1910, a rare honour, and £350 was raised through public subscription. The bronzework was designed by Sir W Goscombe John RA. It was originally sited near the old police station in Tai Bach, but was moved to its current position in 1926 when the memorial park was laid out.

Granite water fountain with bronze sculpture. Two square piers support a lintel with round arched head. The piers are slightly tapering with moulded bases and Tuscan-style capitals with dentils. The lintel has a pronounced hollow moulding to the underside. Underneath the arch is a stone panel. To the front (S), the upper half bears a bronze bust of John Hopkin Davies. On its L side in relief is 'John Hopkin Davies 1910'. Underneath is a semi-circular water trough with a wide rim and base, the latter continuing from the pier bases. To the rear, the stone panel beneath the arch bears an inscription, 'This fountain erected to John Hopkin Davies, M D, J P, of Tir Caradoc, Port Talbot, by his many grateful friends and admirers, amongst whom he laboured with unfailing kindness for many years, July 1910'. Underneath, a bronze fountain spout has been mounted in the form of 2 stylised rams heads. Plain semi-circular trough below. All mounted on a platform one course high with central semi-circular projections to front and rear.

Listed for its bronzework bust by the pre-eminent Welsh sculptor of the period, and for its historic interest. Group value with other features in the park.