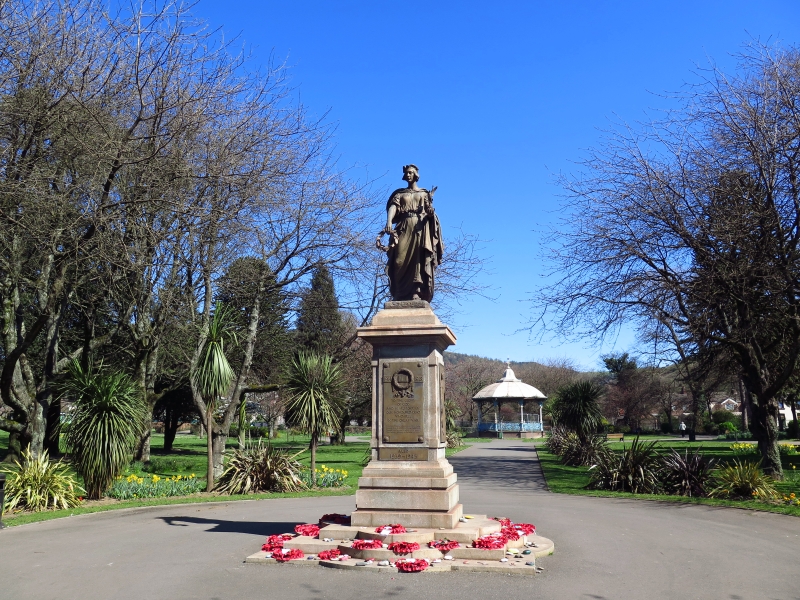 Location: The focal point of the memorial park, in the centre of the main avenue.

The bronzework is by the sculptor Louis Frederick Roslyn (1878 - 1949), born in London. He studied at the Royal Academy schools in London and exhibited between 1904 and 1940 at a wide range of venues including at the Royal Academy 42 times. His work consisted mainly of bronze busts, and he undertook a number of military busts for the Imperial War Museum. His commissions include a war memorial for the British West Indies, a bust of Lady Elizabeth Bowes-Lyon (Queen Mother), and one entitled the Triumph of Labour, a gift of the workers of Great Britain to the workers of America, to be erected in Washington DC. He also exhibited under his former name, L Fritz van Roselieb.

The plinth is by the architects Lanchester, Lucas and Lodge and is of Scottish granite, the same source as for Balmoral Castle.

Square-section pillar of unpolished granite supporting a bronze statue. Raised fields to the 4 faces of the pillar, with bands at top and bottom, for the attachment of bronze plaques. Flat projecting capstone with cyma moulding to underside, supporting a stone plinth on which the statue rests. The pillar is on a tall stepped base with banded rustication and hollow moulding around the top. On a wide 3-tier stone platform, with a semi-circular projection to the centre of each step.

The tall bronze statue is of the Angel of Victory, holding a wreath in one hand and a small winged victory in the other. The sculptor's name is inscribed on the bronze base, L F Roslyn 1925. A rectangular bronze plaque is mounted on each face of the pillar, each with a scene in relief. That to the front (S) has a wreath in high relief, and a band set behind with '1914 1918'. Below is an inscription 'To the glory of God in memory of our honoured dead who fell in the Great War'. A short rectangular bronze tablet has been inserted beneath the raised panel and reads in relief 'Also / 1939 - 1945'.

The remaining panels represent war, peace and remembrance. The E panel bears a figure of a naked young man loosely veiled by a sheet. He holds a sword in one hand and a wreath in the other. Behind the top of his head is a scene of men in action. To the N is a robed woman in relief (peace) flanked by a small child and a lamb. Doves fly in the sky above and underneath is an inscription 'The peace of God ...'. The final panel to the W bears a fully robed figure of remembrance bearing a lamp in one hand and a branch in the other. Above are scenes of soldiers bearing stretchers and lines of graveyard crosses.

Listed grade II* as an exceptionally fine war memorial, the bronze sculpture of particular artistic and iconographic interest. Group value with other features in the park.