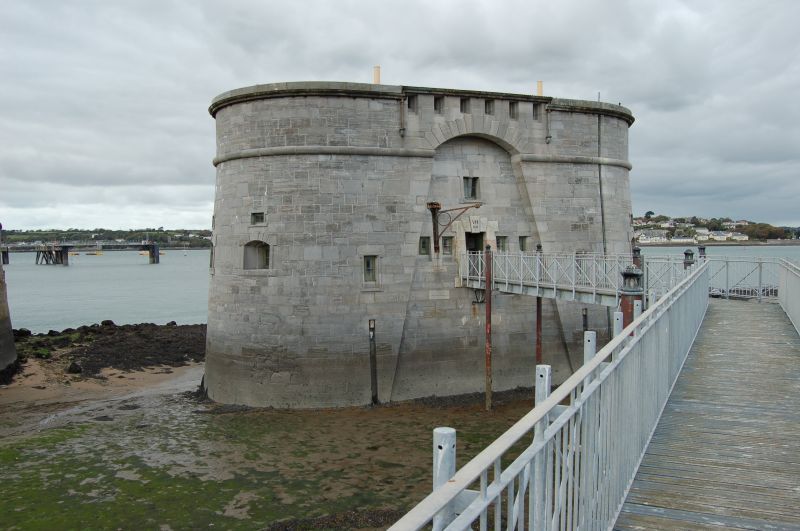 Location: Situated some 50m off foreshore, close to NE corner of dockyard.

Defensive tower built by J. and C. Rigby, contractors of London, for the Board of Ordnance; one of a pair with the South West Tower at Fort Road. Known locally as ‘Martello Towers’ or ‘Cambridge Towers’, these were intended to defend the Dockyard from landward and seaward attack supplementing the guns at Pater Battery and the Defensible Barracks.

Surviving plans of 1861 record that the tower was begun 28/11/1848 and completed 30/5/1851. Built to accommodate officers and 33 men, with basement stores, 12,500 gallon water tank and magazine for 198 barrels of powder. The main floor had two soldiers' rooms and officers quarters. The roof had 3 x 32-pounder guns mounted on traversing platforms and four brass 12-pounder howitzers. The armament appears to have been removed in 1881.

By the late 1860s, due to advances in artillery and warship design, the North East Tower had become obsolete; consequently it was abandoned as a fortification and was used to accommodate soldiers and their families. During the Second World War three light anti-aircraft machine guns were mounted on the roof of the tower, seeing action against enemy aircraft. Post-war the tower was used as a dockyard store until it was abandoned during the 1960s.

Limestone ashlar, basement and main storey plus top gun-platform. Trefoil plan with flat front to landward, curved ends and curved seaward side. Battered walls to heavy bull-nose moulding under high coped parapet. S side has centre parabolic arched recess breaking cornice with rusticated voussoirs. Six small musketry loops in parapet over. Within arch is granite rusticated doorway dated: 'VR 1851'; two loops each side and iron hoist to left. One window above with keystone. To left and right of arch, single loop, then curved ends each with three camber-headed, ashlar framed windows with smaller square openings above. Seaward side not inspected.

An important example of Victorian military engineering. Group value with other listed structures at Pembroke Dockyard.