Footbridge over the Roath Brook between the Lake and the Conservatory 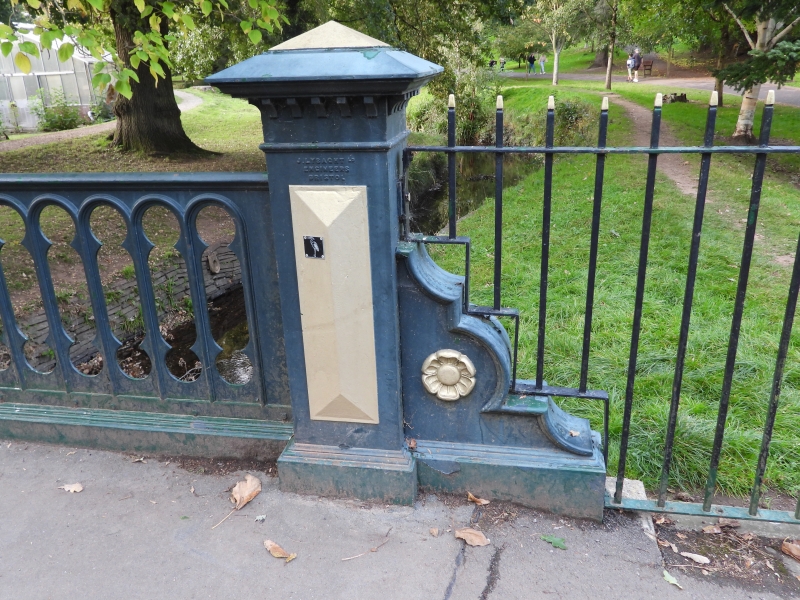 Entry Name: Footbridge over the Roath Brook between the Lake and the Conservatory

Location: Spanning the Roath Brook S of the Lake and N of the Conservatory. Carries one of the transverse footpaths between Lake Road West and Lake Road East.

Roath Park, one of the largest Victorian parks in S Wales, was made along the valley floor of the Roath Brook on land donated by the Marquess of Bute in 1887. It was opened in 1894 and laid out by William Harpur, borough engineer, and planted by the head gardener, William Wallace Pettigrew. An elongated lake occupies a large proportion of the park. It is dammed at the S end, beyond which are an arboretum and botanic gardens including a glasshouse. To the S of Eastern Avenue (in Plasnewydd community) are pleasure gardens and a recreation ground.

This cast-iron footbridge is one of 3 bridges located in the botanic garden and was manufactured by the Bristol Engineers, J Lysaght Ltd. It is probably contemporary with the creation of the park, c1894.

Small single-span footbridge with slightly cambered concrete deck on red brick abutments. Cast-iron balustrades with moulded handrails, open latticework including cross-motifs, and attached heraldic emblems to centre of each side (bearing the 3 chevrons of Glamorgan). At the ends of the balustrading are panelled and faceted piers with large scrolled brackets to outer sides and pyramidal caps. The inner sides read 'J Lysaght Ltd, engineers, Bristol'. Attached plain iron railings beyond. Large curved brackets at right angles to balustrading link handrails to underside of deck.

Listed as one of the few original structures in Roath Park, contributing to its historic character.
Group value with 2 further footbridges and other historic features in the park.