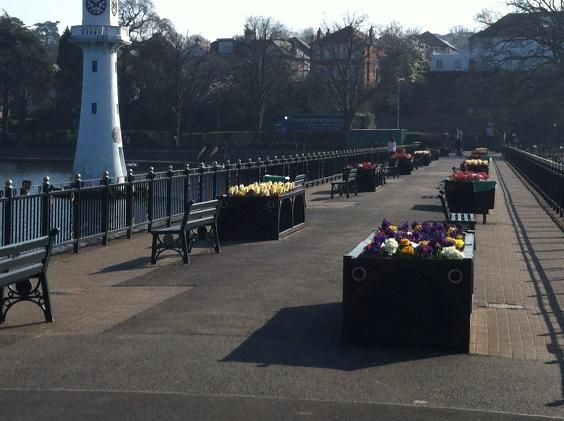 Location: Located in the lake in Roath Park towards its S end, and close to the Promenade which runs along the lake dam from Lake Road West to Lake Road East.

Roath Park, one of the largest Victorian parks in S Wales, was made along the valley floor of the Roath Brook on land donated by the Marquess of Bute in 1887. It was opened in 1894 and laid out by William Harpur, borough engineer, and planted by the head gardener, William Wallace Pettigrew. An elongated lake occupies a large proportion of the park. It is dammed at the S end, beyond which are an arboretum and botanic gardens including a glasshouse. To the S of Eastern Avenue (in Plasnewydd community) are pleasure gardens and a recreation ground.

In the lake, close to the dam, is a memorial to Captain Scott and his companions, who died during their Antarctic expedition of 1910-12, having sailed from the Port of Cardiff. A plaque on the front of the clock-tower lighthouse notes that it was erected by F C Bowring JP in 1915 for the City of Cardiff. The lighthouse was a private gift; the Scott Memorial Appeal Fund had failed to raise enough money for a public memorial.

White-washed clock-tower lighthouse on a rubble plinth designed to appear as loose rocks. Round tapering 3-stage tower, swept towards base. At the top is a polygonal balcony cantilevered on brackets with balustrading. Rising from the centre is a square-section cupola bearing a clock to each face, above which is a moulded capstone and dome, the latter supporting a finial with ship emblem. Facing S is a plain boarded door, partly cut in. Narrow rectangular 4-pane windows aligned above to 2nd and 3rd stages. Same arrangement of windows to E, N, and W sides of tower. Above the doorway is a gold-coloured metal plaque with scrolled edges. It records that the lighthouse is to the memory of Captain RF Scott and his faithful companions, who sailed from the Port of Cardiff on June 15th 1910 to locate the South Pole. They laid down their lives in the Antarctic region in March 1912.

Listed as a fine, unusual and prominent memorial in Roath Park which makes a significant contribution to its character.
Group value with other historic structures in the park.