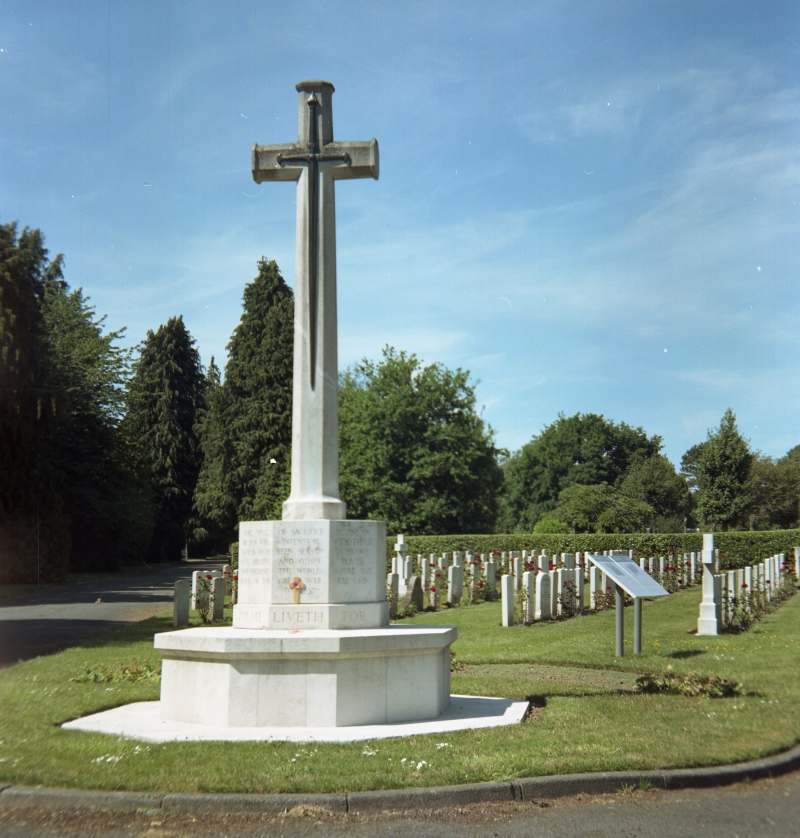 Location: Located in the N extension to Cathays Cemetery, to the N of the A48. Reached from the W entrance gates by paths which lead SE. The cross faces S with war graves to its N.

The War Graves Commission was formed in 1917 to establish graveyards for the fallen, and to commemorate Commonwealth soldiers who died without a known burial place. Three principal architects were appointed to the commission, Edwin Lutyens, Herbert Baker and Reginald Blomfield. The 'Cross of Sacrifice', as erected here, was to a design by Blomfield and is found at sites all over the world. The grave markers behind were mainly built to a standard specification, of Portland stone with cambered heads and standing 0.81m high. The information given on each marker includes regiment or service badge, name(s), age, date of death, and sometimes a cross. A few, in different styles, were provided by family members.

War memorial cross of Portland stone with tapering shaft and chamfered angles; raised flat ends to arms and head. The front of the cross bears a sword, probably of bronze. Set on a high octagonal base on a larger octagonal plinth with overhanging capping. Surrounded by paving, also of octagonal form. The base has an inscription to the front 3 faces, which reads 'This cross of sacrifice is one in design and intention with those which have been set up in France and Belgium and other places throughout the world where our dead of the Great War are laid to rest'. 'Their name liveth for evermore'.

Listed for its social-historical interest as a 'Cross of Sacrifice' to a design by the War Graves Commission, and one of over 1000 throughout the world.