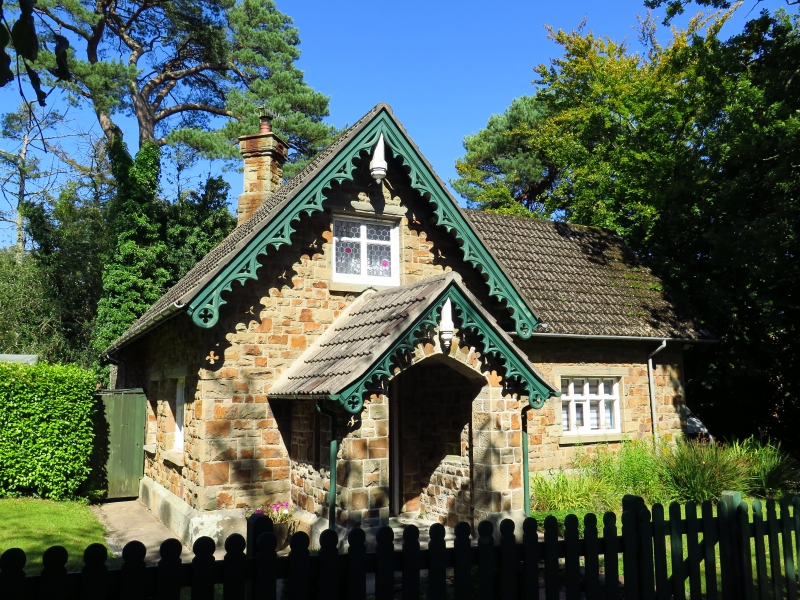 Clyne Castle was owned by the Vivian family, one of the most prominent of the Swansea industrial families, between 1860 and 1952. The first occupant, William Graham Vivian, focused his attentions on alterations to the house, and made a new entrance drive on the S side. Clyne Lodge was built at the entrance to the drive and its design is said to be the reverse of a published drawing by P F Robinson (1776-1858), who had been employed by the Vivian family at Singleton Abbey.
Admiral Algernon Walker-Heneage-Vivian, who lived in the house between 1921 and 1952, extended the pleasure grounds in front of the house, where there are 3 National Collections of Rhododendrons and National Collections of Enkianthus and Pieris. After his death in 1952 the house and grounds, including Clyne Lodge, were sold to the Borough of Swansea, which opened the former pleasure grounds in 1954 as a pubic park, now known as Clyne Gardens.

Cottage orne of one and a half storeys, consisting of a main gabled range with porch and a wing set back on the R side. Of rock-faced snecked stone, fret-cut barge boards with pendant finials, and a replaced pantile roof with diagonally-set stone ridge stack on the main range. The gabled front has a lower projecting porch with Tudor arch, open lancets to the side walls and a ribbed door. Above is a cross window in the gable of the main range with coloured glass. In the L side wall is a 3-light mullioned and transomed window at the front (R) end and a cross window to the centre. In the R side wall is a small lintelled window with coloured glass. The wing has a 3-light window facing the front. In its R gable end is a 4-light bay window and a 3-light mullioned and transomed oriel window in the gable.

Listed primarily for group value with Clyne Castle and other associated listed items in Clyne Gardens.