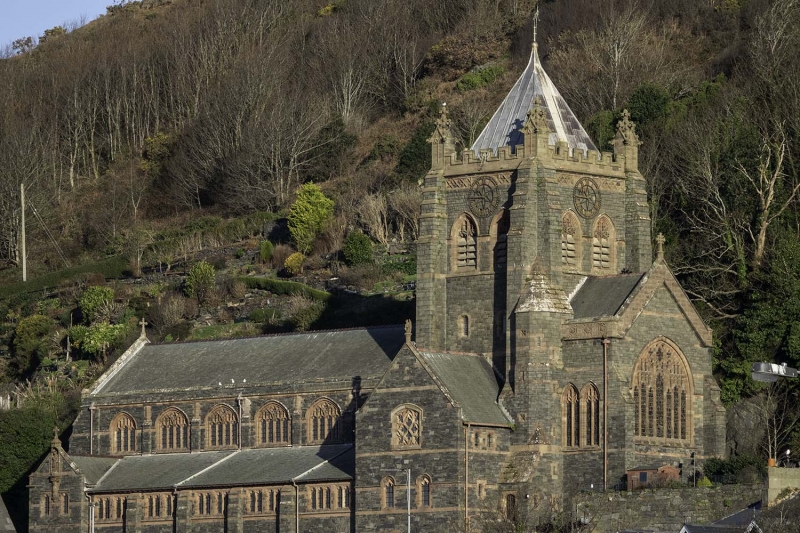 Location: Prominently located on an elevated site against the steep, rocky slope of the hill, at the end of St. John's Hill.

St. John's Church was built at the inspiration of the Reverend Edward Hughes to the designs of John Douglas, architect of Chester. The parish contributed ú3,500 towards the cost, but the majority of the funds, ammounting to ú15,000, was donated by Mrs Sarah Perrins of Plas Mynach as a memorial share to her late husband James Dyson Perrins. This latter sum financed the tower, chancel, transepts, bells, clock, organ and the glass and furnishings at the E end.

The foundation stone was laid with great ceremony by H.R.H Princess Beatrice (Princess Henry of Battenberg) on August 27th 1889. Building was almost complete when in September 1891 the crossing tower collapsed, demolishing most of the nave and chancel. Douglas, who faced much subsequent criticism, attributed the collapse to the blasting operations which had been necessary to carve a terrace out of the rock for the siting of the building. Undaunted, the parish set about the task of rebuilding which was made possible by the donation of a further ú15,000 by Mrs Perrin; the church was completed in 1895.

Cruciform plan in restrained Perpendicular style. Of snecked, rough-dressed slate-stone blocks with red sandstone dressings and banding; medium-pitched slate roofs with coped and finialed gable parapets. 4-light Tudor-arched tracery windows to nave clerestory with continuous moulded labels and string courses. Shallow stepped buttresses (expressing internal bay divisions). Paired 2-light cusped windows to single-storey nave aisles with exposed rafter ends to slightly oversailing eaves; battered base to S aisle. Complex 5-lightW window in Reticulated Decorated style with label and cill mouldingsas before; plain buttresses, stepped at the top. Flanking the W frontto N and S, and set back, single-storey porches, gabled to the sidesand with blind heraldic tracery panels to their W parapets. Steppedaccess to W entrances; continuously-moulded Gothic arches with returned ogee labels terminating in foliate finials. Canopied niche to the apex of the S porch gable carried on a naturalistic foliate corbel with similar base. The niche contains a figure of St. John the Baptist and is flanked by the inscription: `I am the way, the truth and thelife.' Beneath this, flanking single-light cusped windows with plainlabels.

Large pointed crossing arch, stepped up and with moulded jambs carried on foliate corbels. Decorative C13 style tiles. Perpendicular style choirstalls with trefoil bench-ends and blind and open tracery. To the S and occupying the whole of the S crossing arch, a large Perpendicular panelled organ. The N transept (Lady chapel) is entered from the N aisle via a wide pointed arch; 2 plain pointed-arched openings to crossing with decorative wrought iron screens. Single bay chancel with large arch as before. Simple piscina on N wall and a 2- seat sedilia on S wall with arched labels to ogee heads; foliatefinials. Wooden waggon roof with 3 tiers of tracery panels; decorativetiled pavement as before. Large reredos with central Crucifixion Groupand flanking saints, all in complex canopied niches; angel finials andblind tracery dado. Good figurative glass as before in chancel and Ntransept windows.

Listed grade II* as one of the more significant churches by John Douglas in largely original condition both externally and internally.