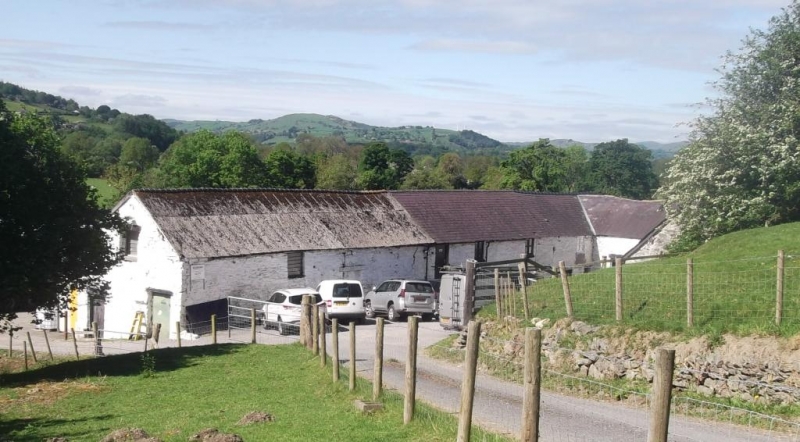 Location: SE of the farmhouse, below the road close to the junction with the lane leading to Corwen.

An L-shaped range of buildings comprising shippons, stables etc. Roughly coursed whitewashed rubble with slate and corrugated tin roofs. Stable in the shorter W range, a single storeyed building with 2 doorways, each with a window alongside, all openings with tooled slate lintels. A separate building adjoins to the right, with 2 doorways, one with rough timber lintel. Shippon etc. in the long S range: One low original doorway towards centre of right hand range in N facing elevation, and inserted opening towards corner with stable, and 2 upper windows and a small loft entry below eaves above. A further loft doorway up steps towards the left of this range. Paired wide segmentally arched openings to cart shed in the lower (S) elevation. Left hand section has added brick lean-to against N wall, doorways in gable elevation, and central doorway in rear (S) elevation, flanked by vents and two small square windows.

Trewyn Fawr represents a good example of a C18 farmstead, in which the farm buildings survive substantially intact and form a group with the farmhouse.