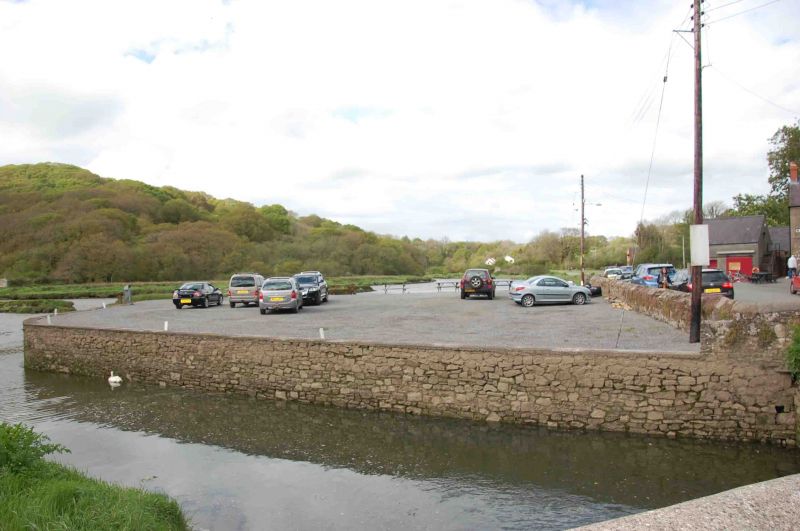 Location: In the angle between the Treen Lake and Cresswell River, to the E of the confluence, and immediately opposite to the Cresselly Arms P.H.

There were (at least) three quay structures in close proximity at Cresswell: in addition to the listed structure opposite to the Cresselly Arms now commonly known as 'Cresswell Quay' there were two other quay structures just downstream: a small quay in Lawrenny Parish, submerged at spring high tide, and another small quay in Carew Parish just W of Cresswell House. The latter two quays survive (1996) only as ruined walls rising a short distance from the edge of the river. Historically, the river bank for a considerable distance upstream was also regarded as part of Cresswell Quay.

The listed quay structure was in existence by 1756. In 1775 the 'quay' is again mentioned, when leased by J B Allen of Cresselly House to Sir William Owen and H. Powell. Up to this date there had been a boundary stone separating the 'quay' of Owen, Barlow and Powell lying further to the N from that of Allen.

Twenty-one out of forty ships registered on the Cleddau in 1795 were based at Cresswell Quay. By the end of the C18 larger ships were loading downstream at Lawrenny Quay, and coal was being moved from Cresswell to Lawrenny in lighters. In 1811 Fenton described Cresswell as "a quay for the shipping of coal in vessels of smaller burthen than those that load at Lawrenny". The export of coal from Cresswell Quay ceased in about 1840, and thereafter only general traffic used it. This also has ceased and the listed main quay structure is now only used as a car park or a space for occasional open-air events.

The Quay is an irregularly three-sided structure at road level projecting about 30 m out from the road to reach the deep channel of the Cresswell River estuary. The channel of the stream called Treen Bridge Lake marks its S side. The quay is faced with stonework on the exposed faces overlooking the water and is open, apart from a low boundary wall, on the side towards the road.

The exposed faces are battered-faced retaining-walls about five metres in height, rounded at the corners, and more or less exposed according to the state of the tide. The facing of the retaining walls is of uncoursed or informally coursed local rubble sandstone. The masonry is rather insubstantial for a civil engineering structure. In places there are remnants of upright rubbing timbers fixed to the face. There is also a metal ladder. There is now no parapet, but the top of the retaining walls has been strengthened in concrete. The interior space is grassed or gravelled. At the rear, against the road, is a low stone boundary wall, evidently post-dating the industrial disuse of the quay.

Listed as an C18 coal wharf, one of an important series on the Cleddau estuaries.