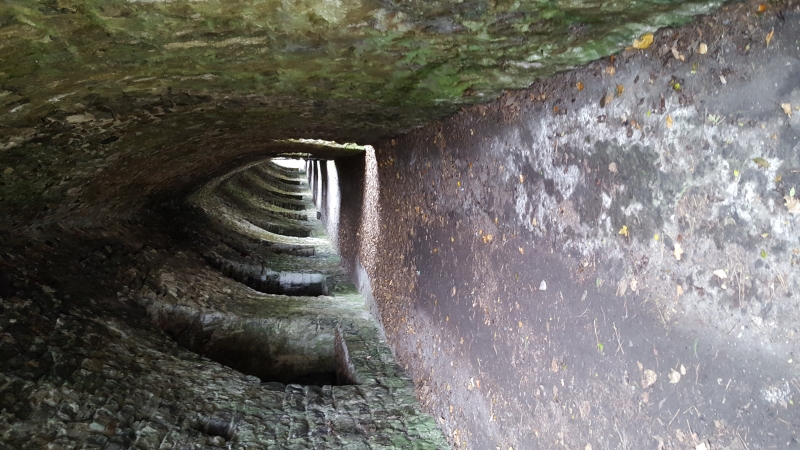 Location: At the S side of the main private road entering the Kiln Park caravan site, on the E side of the A4139. They are related to the extensive Black Rock quarries at their rear.

History: The origins of the kilns at Kiln Park are obscure. The name John Nash has been traditionally suggested strongly in this connection, and has led to the notion that the celebrated architect (who died in 1835) might have been involved. But there was also a colliery blacksmith of that name, born in 1808, living in Saundersfoot in 1861. A surviving deed shows him to have been a substantial person, trustee for some property in the period 1854 to 1875. As the GROUPED KILNS at Kiln Park are evidently a consequence of the great exploitation of the Black Rock Quarry made possible by the coming of the Pembroke and Tenby railway in 1863, it is to the latter John Nash that the credit may be due, if there is any truth in the tradition at all.

Description: Aset of six large limekilns with covered passage, built against a N-facing quarry face. Hammer-dressed limestone with a slight batter to buttressed wall enclosing kilns and passage. The passage formerly housed a railway line and has steep entrance arches in its E and W ends, and 5 lower segmental arches in the long N wall, together with 4 semi-circular windows or ventilators. Steeply vaulted interior. Each kiln has drawing holes to E and W, opening off access vaults divided by stone piers to form a row of 12 steeply pointed vaults. Access arches through the intervening piers align with the drawing holes and there are shutes from each kiln which permitted the direct loading of lime into wagons.

Listed II* an impressive and well-preserved example of limekilns of the railway era forming part of a group with the other kilns at Kiln Park.

Part of Ancient Monument No. Pe 436