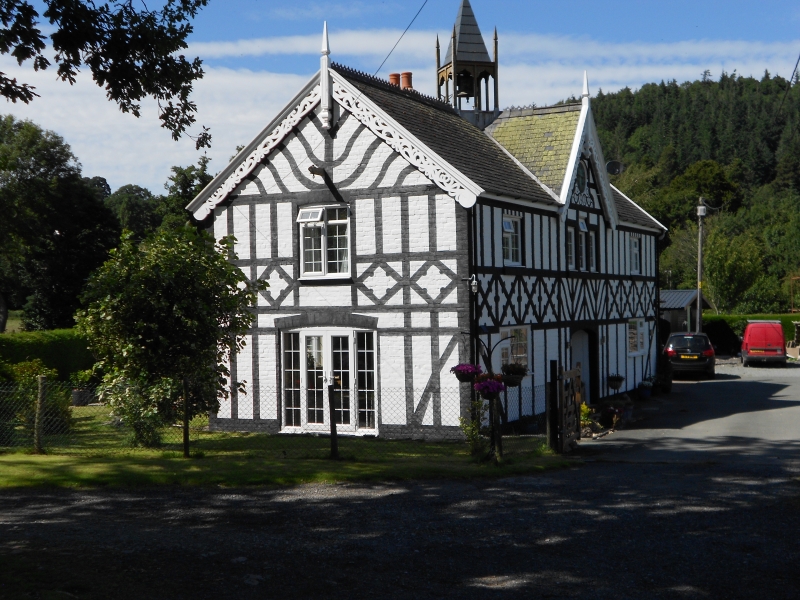 Location: Located at the W end of the village, set gable on the N side of the road to Newtown.

The sawmill, with the former stables and piggery, provided a consciously picturesque group of service building in the park of Dolforgan hall, built by the Willans family in 1900. Now converted to a dwelling.

Of brick, having a slate roof with openwork crested ridges and heavily carved timber bargeboards. The brick is painted white, and decorated with black-painted design representing elaborate timber framing. Two storeys, three bays, the centre bay narrower, containing the former entrance recessed under a segmental painted brick arch. The central bay is gabled to the E, and contains a clock with gilded figures, and the date 1900. C20 timber and plastic windows. At the centre is an open timber bellcote supported on posts standing on the ridges, and having spike finials, retaining its bell. Attached to the N gable end is a lower outbuilding with similar painted walls and slate roof, and a steeply pointed bellcote, set at an angle to the ridge.

Interior not accessible at the time of inspection (January 1996).

Included as one of a group of estate buildings Dolforgan estate, designed to promulgate a perceived local vernacular, and which make a visual impact at the approach to Kerry.