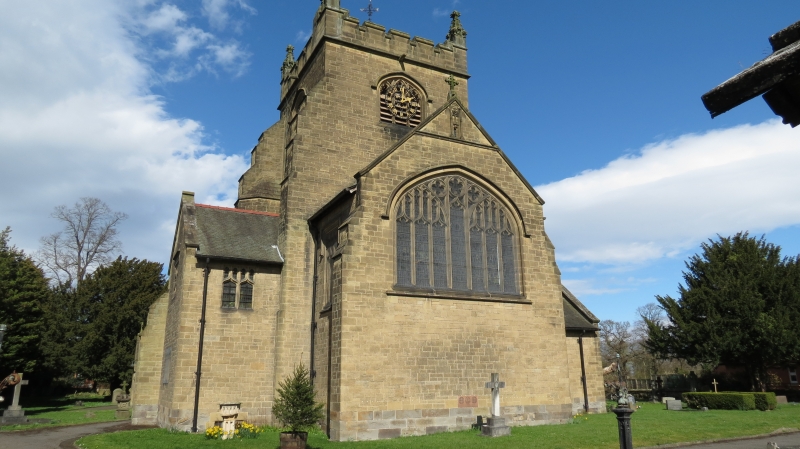 Location: Located to the north of the B 5102 Chester road as it turns south towards the Alyn Bridge. Reached by a Lych gate with carved bargeboards and an inscription dated 1899.

Free Gothic Revival style largely re-interpreting Perpendicular with Douglas and Fordham's own characteristics. Constructed of deeply dressed stone laid in irregular courses, the first three courses of larger grey stones acting as a plinth. Built to a cruciform plan with a long nave and north aisle of five bays, short high chancel and transepts. Square tower to crossing. Green slate roof. Windows to the north aisle are square headed with no drip stone or hood mould and key-hole tracery as on east face of south transept. Angle-stepped buttresses to the tower are built flush from the east and west faces so as to continue wall-plane north and south. Buttresses to east end wall are similarly flush with the wall-plane and project north and south to echo those on the tower. Original rain-water goods bear dates of completion i.e. 1892. Three-light louvered openings to tower, crenellated parapet with crocketed finials. Clock to east face of tower bears dedication to "ER" and date "1902". Attached stair-turret to angle of south nave wall and south transept. East window of seven lights. Single storey entrance porch to the south with a carving of Christ the Shepherd in sculpture niche above arch. Stained glass to east and west windows.

South transept is vestry, north aisle opens into transept to become a small chapel. Choir is forward of the chancel and situated under the crossing with reredos, stalls, and all pews designed by Douglas. Stained glass by Heaton, Butler, and Bayne of late 1920's to north transept, by Kempe in the east window 1905 and by Morris and Co, to the chancel of 1907. Organ case by Douglas.

Listed as a good example of a late Gothic Revival church designed in an inventive manner by Douglas and Fordham.