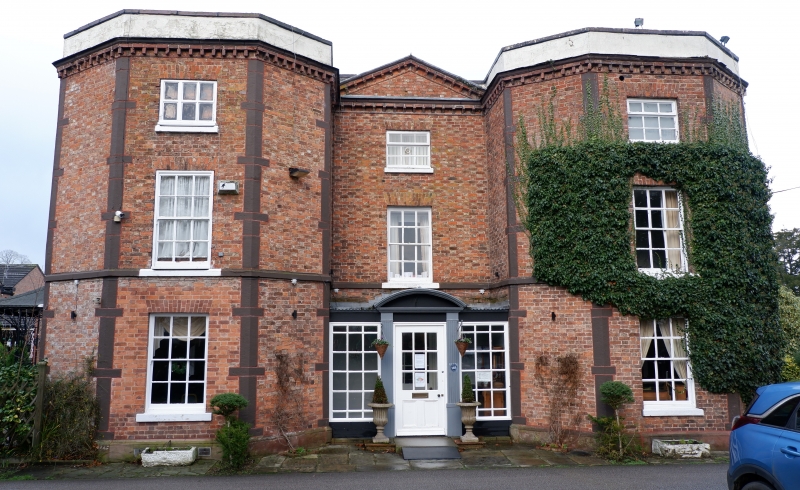 Location: Located in its own grounds and set back from the north side of the B 5445 Chester Road, and with Rossett Hall Farm to the north. Reached by a private drive from the road opposite the corner of Rosse

Mid C18 house said to have been built c1750 for James Boydell, with later extensions, now converted to a Hotel.

Red-brick with stone dressings, three storeys with dummy third storey to south-west elevation, rendered parapet. Entrance front to south-east is three bays wide with recessed central bay under triangular dentilated pediment in brick. Bays to left and right have heavily chamfered corners with stone long and short quoins to the angles and stone string course between first and second storeys. Later one storey wooden porch to central bay with semi-circular pediment. Dentilated brick cornice beneath rendered parapet wall. Near flush sliding twelve pane sash windows to first and second storeys. Cornice continues to the left return with only two storeys indicated by fenestration. Pebble-dashed wall with four twelve-pane sliding sash windows to second storey, four sets of French windows beneath opening onto Victorian verandah shown to have existed by 1850 from picture in possession of current owner. To the right return three storeys and twelve-pane sliding sash windows to shallow semi-circular bay with dentilated brick cornice said to have been constructed 1780. Large extension to rear and south-west.

Some original features including early C19 stone cantilevered staircase from entrance hall. Late C18, classical fireplace to north-east bay with egg-and-dart and acanthus decoration, coupled attached Corinthian columns to either side, medallion showing Britannia with laurel in central rectangular medallion to overmantle, framed by swags and urns. To the dining room is High Victorian plaster ceiling mouldings and five panelled door. To the second storey are four bedrooms with further fielded-panelled doors.

Listed as a good example of a mid C18 house.