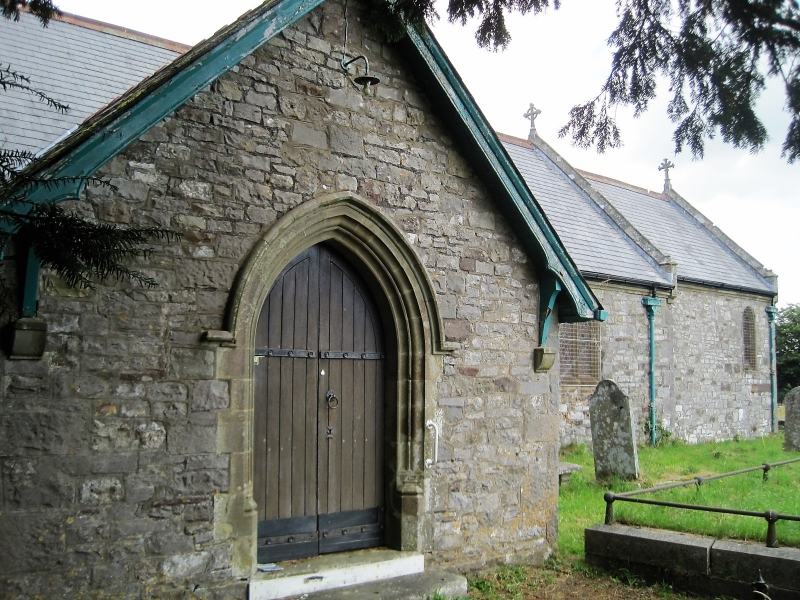 Location: Isolated from the village to the E, and on a hilltop site at the top of Church Road.

The oval churchyard and hill-top site suggest an early medieval foundation, but the late-medieval stoup and reclaimed roof bosses are the earliest surviving features. Architecturally the earliest part of the present building is the post-medieval W tower. The remainder of the church was restored 1843 and 1876, then rebuilt in 1895-6 (date on rainwater heads) by E.M. Bruce Vaughan, architect of Cardiff.

A simple Perpendicular-style church comprising nave, lower and narrower chancel, S porch and N vestry. Of rubble stone with slate roofs behind coped gables, and with moulded stone cornice to nave and chancel. The lower late C19 porch has a pointed doorway with continuous moulding and hood mould, and double boarded doors with strap hinges. The side walls have a square-headed single-light window. The nave S wall has two 2-light square-headed windows with cusped ogee lights. Both nave and chancel have rainwater heads dated 1895 in the S elevation. The chancel has a cusped window set back from the E end, a 3-light E window with hood mould, and a N window corresponding to the S window and on the E side of the vestry. The vestry has a 2-light N window and lintelled W doorway with boarded door. The N wall of the nave has 3 square-headed 2-light windows similar to the S side.

The 2-stage tower is battered at the base and has a plinth band, above which is a deeply recessed window in the W wall. A narrow loop is above this window. The upper stage has narrow lintelled belfry openings with louvres. The embattled parapet projects on a simple corbel table, and behind it is a saddleback roof with apex weathervane.

A C15 bracket stoup survives on the R side of the S door, with a fine chip-carved design very similar to fonts at Llantrisant, Llanharry and Pyle. Other fixtures are C19 or later. The font has an octagonal bowl on detached marble shafts with stiff-leaf capitals. The simple polygonal wooden pulpit has blind Gothic panels. Pews and choir stalls have moulded ends, while the communion rail has twisted iron uprights with scrollwork brackets, to a moulded wooden hand rail. A panelled wooden reredos has brattishing behind the altar. In the SE corner of the nave is a war memorial in the form of an alabaster wall tablet. Other memorials, retained from the earlier church, were set up in the chancel. In the S wall is an alabaster wall tablet by Phillips of Talgarth, to Rev Lewis Price (d 1812) and his family erected c1865. Next to it is a polished granite wall tablet to Watkin Rhys (d 1880). Brass plaques dated 1886 either side of the E window commemorate the Morgan and Harris families of Bodwigiad.

Several windows have stained glass. The E window, of 1896 and showing the Ascension, and the contemporary S chancel window depicting the Presentation at the Temple, were designed by Henry Holiday and made by Powell's of London. The N chancel window shows the Virgin Mary and is in the style of Edward Burne Jones. In the nave the S wall has SS David and Andrew at the E end, which commemorates the engineer and manager of the Dowlais ironworks William Menelaus (1818-83), and Faith and Charity to the W of 1947 by Powell's(?). In the N wall of the nave, the E window has male and female figures of c1919, the W window is a late C20 replacement depicting SS Peter and Paul.

Listed as a parish church on a medieval hilltop site, retaining a post-medieval tower characteristic of the district and internal detail including a medieval stoup and good late C19 glass. The church is the centrepiece of a strong visual group including the chuchyard wall, The Rectory, and a well-preserved signpost.