Church of Saint James the Great 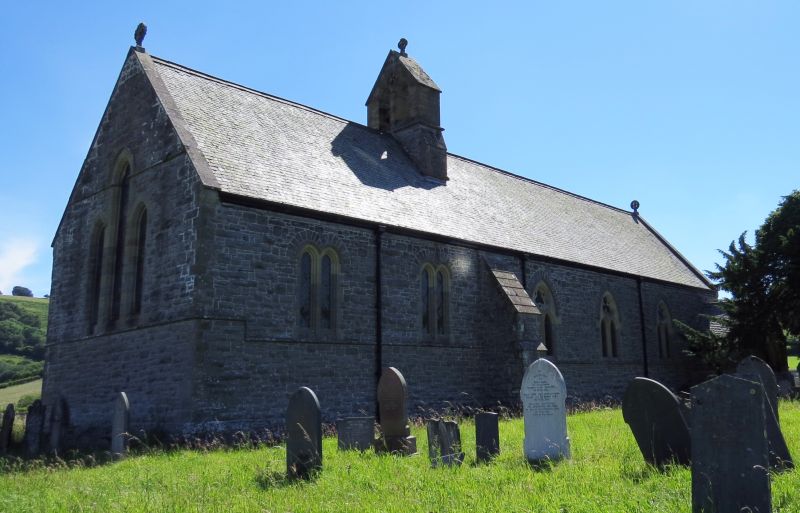 Location: On the SE side of the A494 on the east side of Glan-yr-afon; set within its own walled churchyard.

Erected as a memorial church to Sir Robert and Lady Williames-Vaughan of Rug at an overall cost of £2,328; designed by Sir George Gilbert Scott, and built 1861-1864.

Memorial church in simple Early Gothic style. Nave and chancel in one, articulated by the positioning of the gabled bell-cote, and strongly projecting stepped buttress to N wall (similar buttress to S, with lean-to vestry built against it to the east). Bellcote has paired chamfered arches and inset quatrefoil. Rough rubble brought to irregular courses, with sandstone ashlar dressings to window surrounds etc., and tooled angle quoins; graded green slate roof with coped gables surmounted by cross finials. Porch to NW angle has coped gabled roof and double-chamfered archway with impost band continuing to form sill band of west windows. Roll-moulded arch to inner doorway. The W end has paired lancet windows with plate-traceried rose-window recessed and with strongly moulded surround. 3 windows to the S side of the nave, all 2-light plate tracery, each differently detailed, and linked by continuous sill-band. Lean-to vestry to S of chancel, with simply moulded arched doorway and gathered stack with cylindrical shaft. Chancel has stepped triple-lancet east window. Paired lancet windows to N of chancel, and 2-light plate-traceried windows in N wall of nave, again all differently detailed and with continuous sill band, dropped to a lower level for the nave windows beyond the buttress.

Listed as a good, well-preserved example of a Gothic Revival rural church, with a consistency of design and coherence of detail running through the simplicity of its overall form, the subtle articulation of exterior detail, and the quality of its contemporary interior fittings.