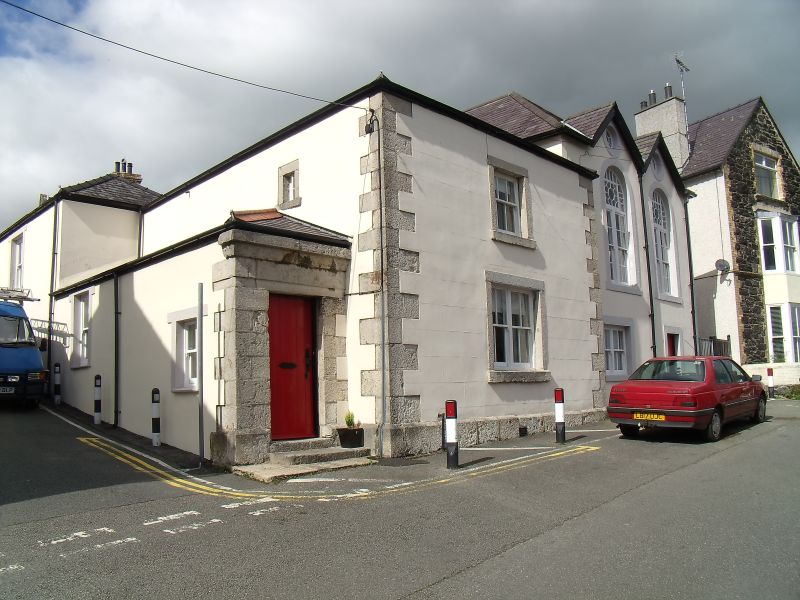 Location: Located on the west side of Beach Road, in the lower part of Menai Bridge. Abutting the northern end is the former courthouse.

The police station is thought to have been built shortly after 1845, the date of the original indentures. A very similar design can also be seen at the former police stations in Brynsiencyn and Llangefni. Menai Bridge Courthouse was built abutting the northern end c.1868 and doorways have been cut through to allow access between the two buildings. A later extension to the rear of both buildings encloses a small open area that was once part of a larger courtyard. Ceased to be used as a police station in 1959. Both buildings are now owned by the Independent Evangelical Church, who bought the premises in 1985 from Ynys Mon Borough Council.

Internally altered but retaining much of original layout. Main door leads to slab paved passage in outshut, with office to right in front room, and two cells to rear. Blocked doorway to cells. Interior walls of passage to cells of brick with ceilings of large slate slabs. Cell doors have single-piece stone jambs and lintels, original heavy doors of thick boards with iron sheeting encasing cellward side, fitted with a single large bolt and view hole. Fixed metal frame, barred windows to rear of each cell. Upper storey room to rear of extension has cast iron fireplace set into decorative moulded fire surround.

Listed as a relatively complete C19 police station, retaining many features including cell doors. Built as a direct result of the growth of Menai Bridge in the mid C19, reflecting a need for local policing and law enforcement. Forms a group with the adjoining Magistrate's Court.