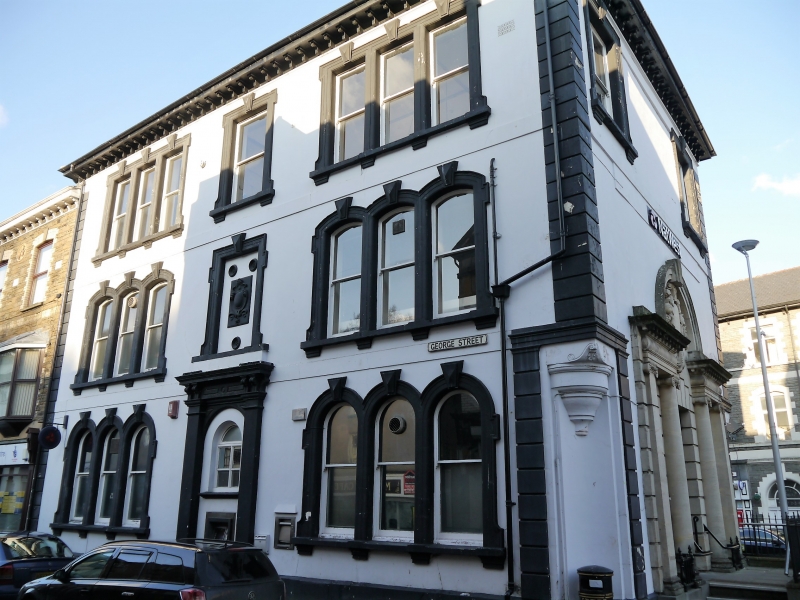 Location: In Pontypool town centre at the junction between George Street and Osborne Road.

A mid Victorian club building (the Pontypool Club) dating from 1850-1860, which was converted into a bank in c1905, and externally almost unaltered since that date.

A mid Victorian office block in an Italianate style with three balanced facades. Rendered and painted with a Bath limestone surround to the bank entrance and an artificial slate roof. The entrance facade faces down George Street and is an alteration of c1905 when the Bank put a Classical stone entrance onto the existing building. This is in the form of a Serliana, with grooved ashlar behind and a Venetian type feature planted onto it. Three bays with Ionic pilasters to the outside and half columns to the inside. These frame small single pane windows with keyed heads. Central eight panelled door with small rectangular light over under a voussoir head. Full entablature broken in the centre and arched up with keyed head and containing an elaborately wreathed oval in the tympanum. Above this are two 2 over 2 sashes in architrave frames on the second floor, the first floor being blind. The facade is framed by grooved quoin pilasters which die into corbelled stops at ground floor level and these then become hollow niches, also with a frame. Second floor band carries plastic bank sign. Frieze band and modillion eaves cornice, hipped roof.
George street (left) facade. This has three storeys of triple windows with keyed heads and architrave frames. The ground floor ones have semi-circular heads, the first floor are segmental and the second floor are flat topped. Plinth, string at each floor level, listel, modillion eaves cornice. The centre bay has a Tuscan framed doorway now blocked and with a small arched window. Above is a panel with an architrave frame and a device; above this a single flat topped window.
Osborne Street (right) facade. This is as the facade above but with a deep three storey porch in place of the centre bay. This has the corners rounded off and is flanked on the right by spear-head iron railings which front a small basement area. This has a two storey rusticated feature framing a panelled door and an arched window above. The second floor has an altered casement window framed by rusticated pilasters. Plat bands at each floor and cill level, cornice and parapet above. A tall brick and stone stack is visible on the roof.

Interior of the ground floor was completely changed in recent years.

A good example of a mid Victorian office building with later conversion to a bank. This building has important townscape value as the visual stop at the north end of George Street.