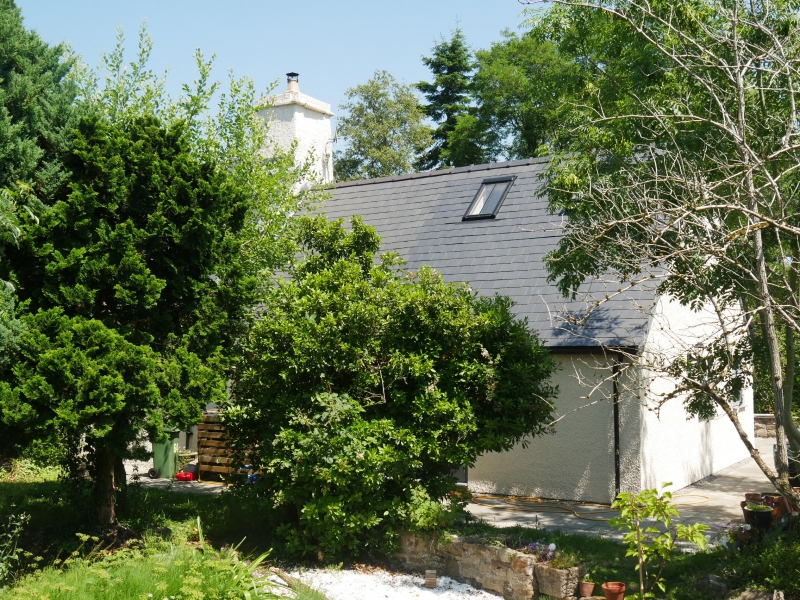 Location: About 500m to the south of Pontymoile roundabout on the east side of Stafford Road

A C17 cottage. A date in the second half of the century is probably indicated. The extension on the south dates from 1956 when the adjoining C17 house was demolished. The house faces away from the road because when built the road was before it, and this was moved behind when the railway came through in 1858.

Pebble-dash rendered and painted, probably over rubble stone and with an artificial stone slate roof. A one and a half storey two cell house with two heated rooms and an extension on the south end. The entrance front is on the east away from the road. On the left is a projecting gabled porch with an pointed arched doorway and plank door. Two windows, three paned casements which are modern hardwood replacements (c1985). Two gabled eaves dormers above, with the same windows. Steeply pitched roof with two ridge stacks, the southerly one is much more massive, although it has one flue to the others two. This may indicate that this is the earlier one and the other is an alteration. The weathering for thatch on the lesser chimney suggests that it is a fairly early addition, however, as the house has probably been stone slated previous to the present artificial ones.
Street elevation : This is very little changed with two small windows in the main body and a door in the extension, all these are modern replacements.
The north gable has a small pointed window with lattice glazing which is probably an early C19 alteration.

The interior has been altered but the evidence suggests that the original plan was one heated room with a dairy on the north. This is suggested by the chimneys and by the still lack of window in the north room on the road elevation. The main room has stop chamfered ceiling beams witrh run-out stops, the secondary room has much less well finished ones. The secondary room has has a larder partitioned off on the west side, this is entered from the main room and lit by the small pointed window in the gable. The doorway has a wooden ventilator over it and the change probably dates with the window to the early C19. There is a baffle entry from the porch but the stairs now date from 1956 and are housed in the extension built at that time when the next door house was demolished. The position of the stack stair is still evident. The upper floor was two rooms but now has a central corridor. The principal rafter roof is well finished with chamfers on the principals. The interior of the porch includes a C17 triangular roof truss halved and pegged at the apex.

An attractive and relatively little altered cottage dating from the late C17.