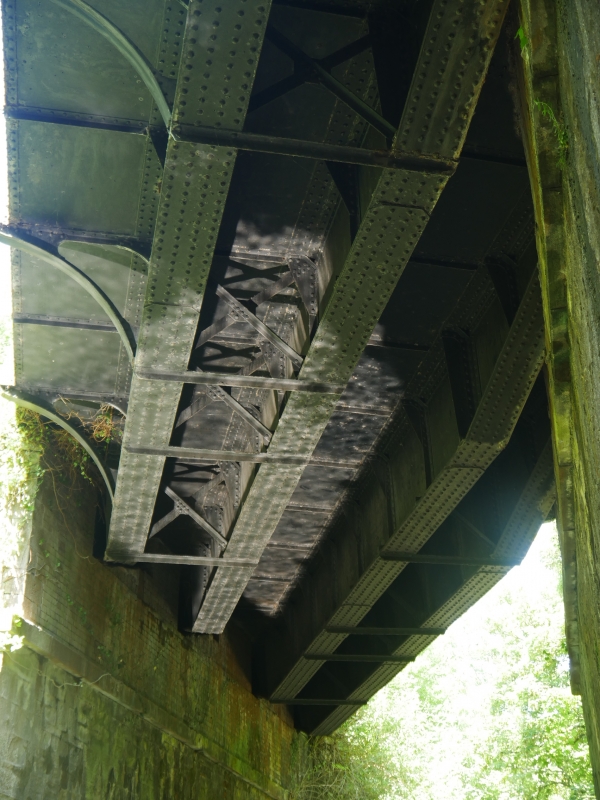 The Pontnewynydd branch of the Monmouthshire Canal (see description of the adjoining canal bridge) was converted to a railway in 1852-4 (opened to Blaenavon 1/10/1854), and the newly retitled (1848) Monmouthshire Railway and Canal Company also built a line down to Newport which opened in 1852-3. The line was engineered by Robert Sayer. There was an intention to close the canal but this was not allowed because of the interests of the Brecon and Abergavenny Canal, and this is why the railway at this point has to climb onto so high an embankment. The company was amalgamated with the Great Western Railway in 1880 and the run down of the canal began, but the railway remained very busy with heavy coal traffic leading to the replacement of the canal span of this bridge in steel by the Great Western Railway probably in c1905, a period when this company was renewing a very great many bridges with steel plate girders of this type. The line was closed 3/05/1980 following the cessation of coal production at Blaenavon, but a Newport-Pontypool railway link remains on the east bank of the river.

A bridge in two parts, a steel plate girder crossing the canal and a stone arch crossing the footpath to the canal bridge. The stonework is of large coursed squared blocks of limestone. Semi-circular arch to the footpath with impost blocks, keystone and voussoirs. Parapet set slightly forward above. The span over the canal was presumably originally in cast or wrought iron, but is now a steel plate girder. Light steel railings to whole. This bridge crosses the boundary into Pontymoile Community.

This is an interesting two phase railway bridge which shows the work both of the original constructor the Monmouthshire Railway and Canal Company and the later owner the Great Western Railway. It also has strong historic and visual group value with the immediately adjoining canal bridge (in Pontymoile community).