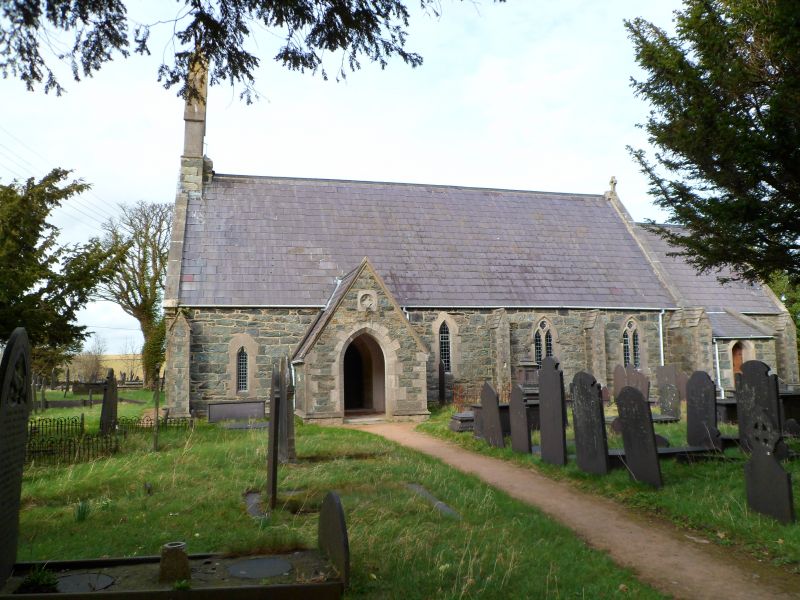 Location: The church stands at the end of the village, within its churchyard.

Originally a chapelry under Bangor, the parish was established in 1888. The building was designed by Henry Kennedy, diocescan architect, and built in 1848 under the patronage of the Nantporth family to replace a single cell chapel which lay further to the N within the present churchyard.

Built of roughly squared igneous stone with margin dressed and scabbled gritstone dressings, the chancel joints galletted, and a large unit slate roof. Nave of 5 bays, divided by gabled buttresses. Two-light windows with trefoiled heads, and drip hoods with mask terminals. The short chancel has a lean-to vestry on the S with the heating chamber below. Triple lancet E window, and gable floriated cross. At the W end, a very tall gabled bellcote and two lancets in the W wall. The windows are margin glazed. Gabled S porch with a chamfered outer arch, and a boarded door with heavy ironwork.

The interior has 11 trusses with tie and curved struts to the apex, the feet being carried down to wall corbels. Moulded chancel arch leads up 3 steps to the chancel of 3 bays, demarcated by similar trusses. The vestry, which has direct access through the wall to the pulpit, has a fireplace with a stone surround. Three further steps lead up to the sanctuary which has a strong rail on turned balusters. The E window has rere-arches on slender quatrefoil shafts. At the W end a raked gallery of 2 bays has a balustraded front; the area below now converted to a kitchen and meeting room.

Pulpit cantilevered from the E nave wall on moulded corbels. Font, a polished bowl set in a slate bowl which is carved with trefoil sides. Glass: E windows in memory of the Nantporth family. Pews of pine, with tall lys ends, carved with a trefoil arcade.

Monuments: On the N wall (a) a wall tablet framed in white marble between enriched pilasters, with a weeping mourner leaning on a vase, to Hugh Williams of Pentir, d.1754, and Margaret (Jones), d.1782 and family. On the S side, (b) a Great War memorial slab in white marble on a relief carved slate tablet.

Included as a largely unaltered and seemly C19 village church.