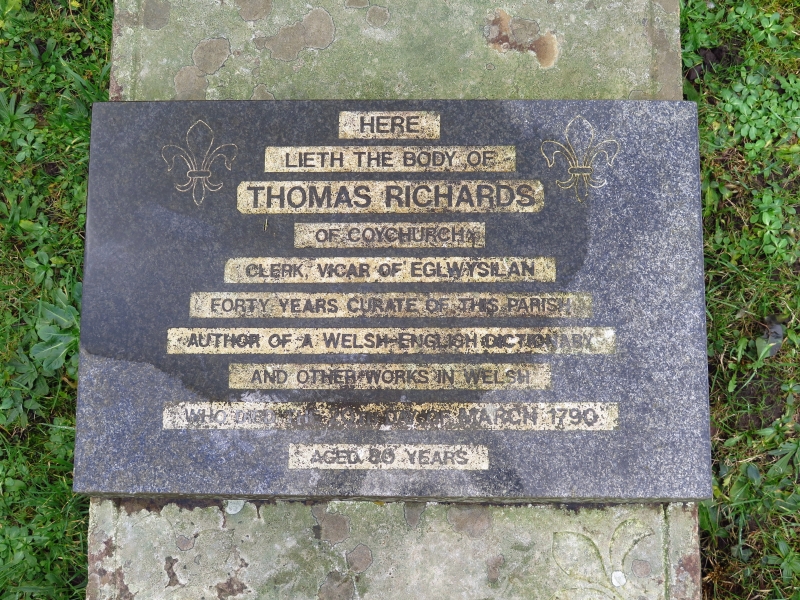 Location: In Coychurch churchyard ESE of the church.

Thomas Richards was curate of Coychurch (Llangrallo) for over 40 years and compiled a Welsh English Dictionary. Born c 1709 in Carmarthenshire, moved to Glamorgan c 1737 and conducted service in Welsh for the parish, the rector Revd Daniel Durel being master of Cowbridge Grammar School and a native of Jersey thus a non Welsh speaker. He supported the Circulating Schools organised by Griffith Jones from 1737 which visited Coychurch and translated into Welsh a number of current religious tracts. His main work was the first substantive Welsh to English Dictionary published by Messrs Felix Farley of Bristol 1753, which also includes information on Welsh grammar, proverbs, botany and authors. It was produced through subscription, at the head of the list being the Prince of Wales, with a wide distribution throughout Wales. He was an early teacher of Edward Williams of Flemingston 1747-1826 who became Iolo Morgannwg, whose mother lived and is buried at Coychurch. Additionally appointed Vicar of Eglwysilan 1777 but continued to reside in Coychurch and died 1790. Thomas Richards is also commemorated inside the church by a Welsh slate monument by Ieuan Rees erected 1990 to commemorate bicentenary.

Plain tomb slab on low stone kerb engraved 'Here lieth the body of Thomas Richards of Coychurch, Clerk, Vicar of Eglwysylan, forty years Curate of this parish. author of a Welsh English Dictionary and other works in Welsh, who died the 20th day of March 1790 aged 80 years'.

Included for its substantial regional interest; group value with Church of St Crallo, churchyard cross and group of 3 table tombs.