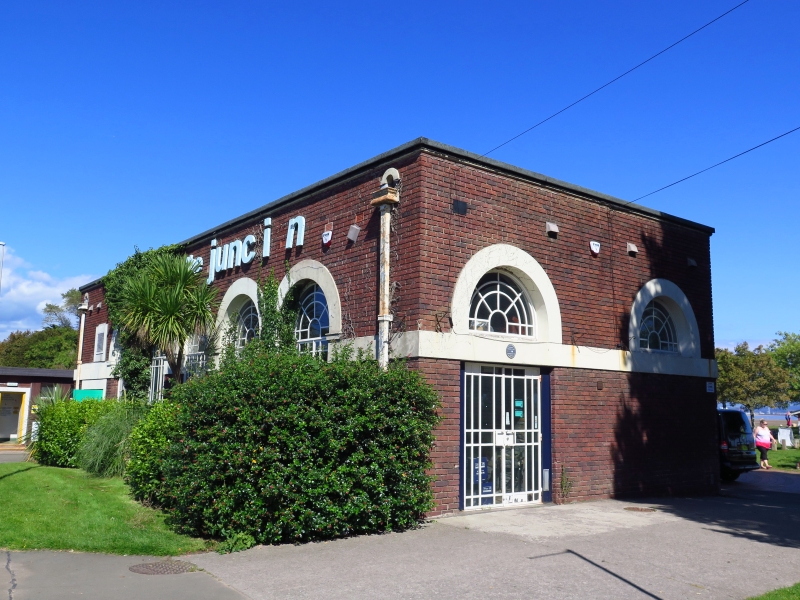 Location: To S of car park to Clyne Valley Country Park. Between Mumbles Road and sea.

Built in 1927 (date on building) by Ernest Morgan, architect, for the Swansea & Mumbles Railway. The building contained two 500kW rotary converters (removed) which converted 6600V alternating current to 650V direct current to operate trams of the Swansea & Mumbles Railway by overhead wires. The building also served as Blackpill Station. The Railway had originated by an Act of 1804, and is claimed to have been the earliest passenger railway in the world, running a regular passenger service from 1807 until 1960.

An electricity sub-station of brown brick with concrete dressings, and flat roof behind a plain parapet. Round-arched windows have an impost band and small-pane metal glazing with marginal lights. Facing the road (to W) are 5 windows, while to the L end is a doorway with its hood removed and a louvred vent over. In the S end wall are 2 lunettes and a broad doorway to the L. Facing the sea is a 6-bay Tuscan portico, above which are 2 lunettes and, in the parapet, a raised field inscribed 'Blackpill'. The N elevation has 2 lunettes.

The machinery removed but the interior retains its tiled floor and I-beams to the ceiling.

Listed as the only substantial remaining structure of the Swansea & Mumbles Railway.