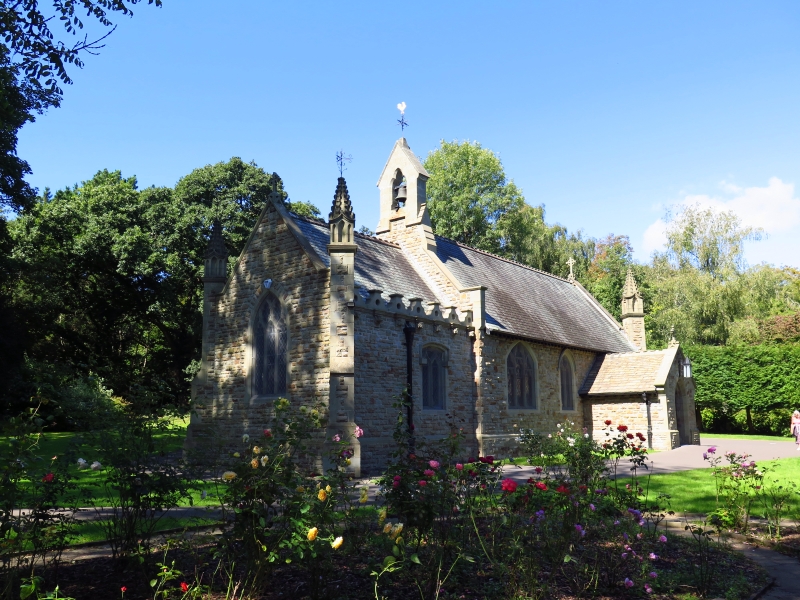 Location: Approximately 400m SE of Clyne Castle and on the S side of Clyne Gardens.

Built in 1907 to designs of William Graham Vivian (1827-1912) of Clyne Castle as an estate chapel. Vivian, from one of the leading industrial families of Swansea, had purchased Clyne Castle in 1860, subsequent to which he remodelled the house, extended the gardens and by degrees enlarged the estate. Vivian provided the chapel with medieval and renaissance fittings and furnishings brought from Italy, Spain and Portugal.

The chapel is aligned N-S and has a nave with aisle and porch and a lower chancel at the S end. In snecked, rock-faced stone with lighter freestone dressings, and a slate roof with gabled bellcote on the ridge between nave and chancel. A simple Perpendicular style is used but the windows all differ in the tracery. The chancel gable end has a 3-light window, large diagonal buttresses with large crocketed pinnacles, and the eaves have cupped cresting with head-corbels. On the E side is a 2-light window, while on the W side is a shorter window and a vestry in the angle with the aisle. On the E side the nave has a 3-light and a 2-light window to L of the gabled porch, and a square-headed window of 2 cusped lights to the R. The N end of nave has a 3-light window, of which the excessively large stops of the hood mould are re-used Italianate grotesque heads and festoons. Diagonal buttresses and pinnacles are similar to the chancel. The aisle has a 3-light window, two 3-light square-headed windows, and a Gothic doorway. Below the nave, steps lead down to 2 Gothic crypt doorways. The crypt contains tombs of William Graham Vivian, Dulcie Charlotte Vivian, and Admiral Walker-Heneage-Vivian.

A 3-bay nave arcade has octagonal piers and arches with 2 orders of chamfer. Boarded wagon roofs have embossed ribs in the nave and chancel, but are plainer in the aisle. The nave has a marble floor laid diaper fashion, while the chancel has an Italian mosaic floor. In the chancel are 2 sedilia under cusped arches. The small Italian marble font has an octagonal base, octagonal panelled stem and a round bowl with pendant finials. The wooden octagonal pulpit has an inlaid sounding board supported on pillars, said to be C15 Italian, from Rome. In the S aisle is a wooden screen, possibly an organ case, comprising gabled canopies over cusped 2-centred arches, all flanked by tall pinnacles and long thin Gothic panels. The chancel has a pillar piscina which has twin shafts with spiral foliage, and a rectangular basin carved with birds and beasts. The concave altar and altar rails with shaped balusters are in polychrome marble and were brought from Sicily. To the L of the altar is a wall tablet to Admiral Walker-Heneage-Vivian (1871-1952) incorporating a dog and pheasant in relief. To the R of the altar is a relief carving of the Transfiguration. The walls of the chancel have other mosaic panels, including a C13 panel said to have come from St Bartholemew in Rome.

Listed as a distinctive Edwardian estate chapel built by member of this prominent Swansea family of industrialists, with particularly high quality architectural fittings, and for group value with other listed items associated with Clyne Castle.