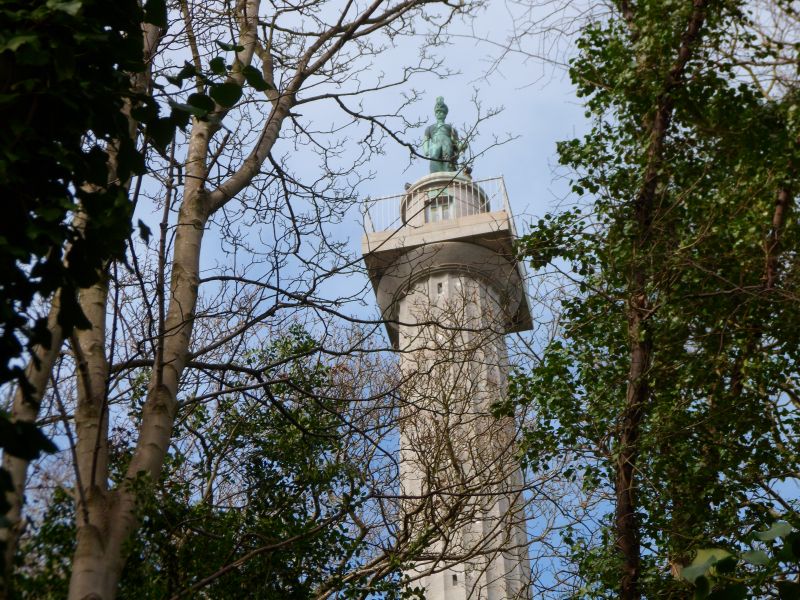 Location: Prominently sited on a hill called Cerrig y Borth overlooking the Menai Strait, N of the A4080(T) Holyhead road, on the approach to Llanfairpwll.

Built to commemorate the military achievements of Henry William Paget of Plas Newydd (1768 - 1854), leader of the British Cavalry during many campaigns of the Napoleonic era; the most notable being as Second in Command to the Duke of Wellington at the Battle of Waterloo on 18th June 1815, for which the Prince Regent showed his appreciation by raising the then Earl of Uxbridge to be the first Marquess of Anglesey. In September 1815 a meeting was held in Beaumaris to consider how best to commemorate the deeds of the heroic Marquess and to show the county's appreciation of him. It was decided that a tower or obelisk be raised on Cerrig y Borth, an ancient common about to be enclosed, from which the monument would be visible from Arfon as well as Anglesey. On the first anniversary of the Battle of Waterloo, 18th June 1816, the foundation stone was laid by Paul Panton of Plas Gwyn. It was hoped that the last stone would be in place by the second anniversary but work was not completed until 8th September 1817. The column as it stands today was not completed until 1860, after the Marquess had died, when the brass sculpture was placed on the top. The architect of the column was Thomas Harrison of Chester and the sculptor of the statue, Matthew Noble.

Greek Doric column in ashlar, built of grey marble quarried at Moelfre, surmounted by railed platform enclosing circular plinth on which stands a brass statue of the Marquess in naval uniform. On the foundation stone there is an inscription, which also reads in Welsh and Latin;

The inhabitants of the counties of Anglesey and Caernarvon have erected this column in grateful commemoration of the distinguished military achievements of their countryman HENRY WILLIAM, MARQUESS OF ANGLESEY the leader of the British Cavalry in Spain throughout the arduous Campaign of 1807 and Second in Command of the Armies confederated against France at the memorable battle of Waterloo on the 18th of June 1815. Thomas Harrison Architect.

The platform at the top of the column is reached by a spiral staircase lit by narrow lights.

An impressive commemorative monument, notable both for the architectural quality and scale of the original Greek Doric obelisk, and for the fine figure which surmounts it. A well preserved and conspicuous landmark on the NW shore of the Menai Strait.