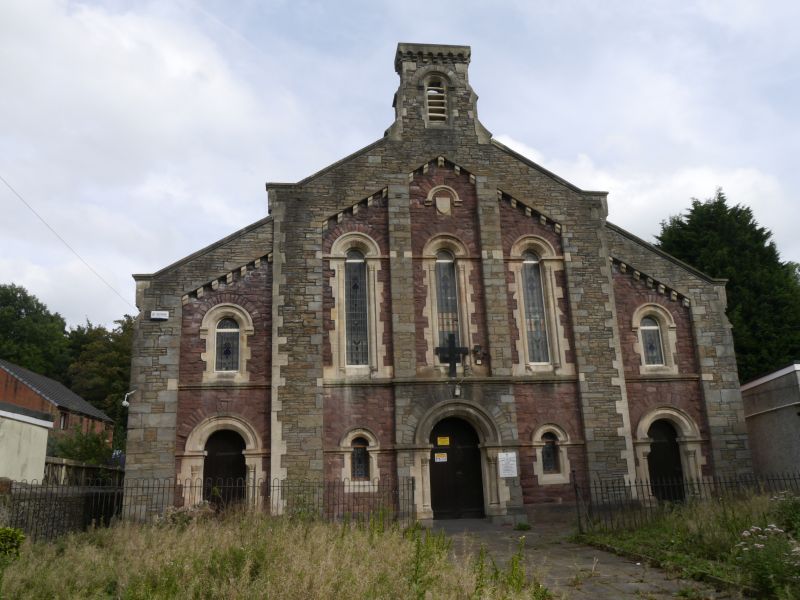 Location: On the main thoroughfare a little N of Risca centre; set back from the road in a walled, part paved churchyard with trees, no monuments.

Chapel with gable end facade in Romanesque style. Red and beige roughly dressed sandstone with cream ashlar is used to define very decoratively the architectural features; artificial slate roof with ashlar coping. Centre 3 bays are framed by pilasters and the bracketed antae which continues diagonally to apex surmounted by the short bellcote with embattled cornice. Two upper-storey pilasters rising from the doorway cornice separate the 3 windows; these are of equal length, long, round-headed with long nook shafts, simple fluted capitals and an impost band; above the central window is the datestone, a shield under a round-arched hood. The central entrance breaks forward slightly and has a wide moulded round-arched doorway with voussoirs above and impost band; recessed boarded double doors. Set back to each side are small round-headed windows linking with the continuous impost band. To each side are bays with similar though smaller entrance doorways with similar round-headed windows above and end pilasters completing the vertical composition. Windows have some decorative glazing incorporating glass in cool colours - predominantly blue, green, mauve. Rendered 5-bay side elevation has round arched windows with chamfered surround separated by pilasters with offset; renewed glazing. Attached rear wing, former Sunday School, retains Welsh slate roof and ventilators.

Listed for its well-preserved architectural interest, its unusual slender arcades and especially for its fine decorative frontage.