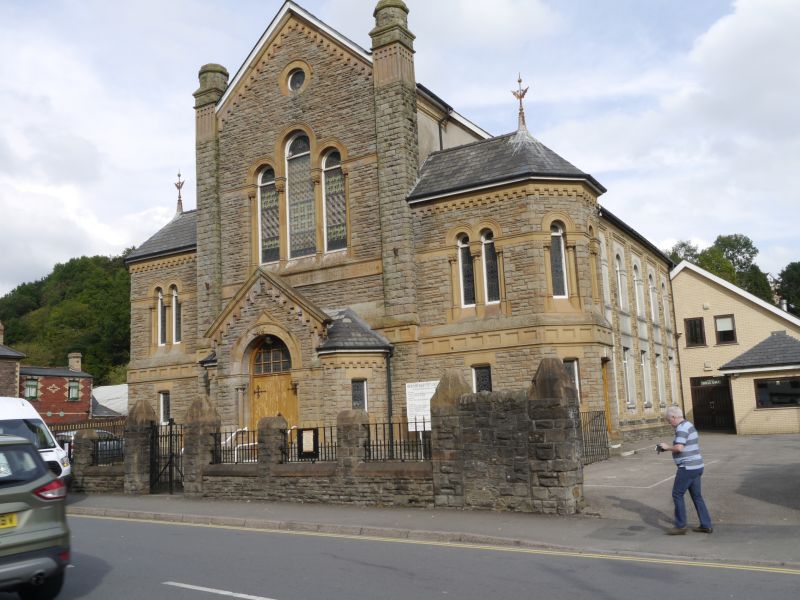 Location: In the town centre, on the E side of the main thoughfare, bordering the N side of Tredegar Grounds. Set in a courtyard fronted by a rock-faced wall with railings and gates.

Present chapel built 1893. Wesleyan Methodism came to Risca in 1798. First Chapel Moriah built at Penrhiw in 1818, Welsh speaking. Cause founded 1835. Second pastor was James Rowe 1842-1859 'one of the greatest men that the Baptist denomination has produced' - his sermons were published posthumously. Sunday School founded 1859, schoolroom opened 1871 at Cwmynant. In 1875 Old Moriah chapel was improved. Revd Evan Ungoed Thomas was pastor 1881-1891, his father was Lord Justice Ungoed Thomas. Lord Tredegar gave part of land designated for the people of Risca to build a new chapel in the centre of town and lease was signed 1893. John Pritchard of Pontymister was the builder, architect Thomas Rowlands of Pontypridd. Cost £3250 and designed to seat 1000; membership then was 500. Old Moriah Chapel was demolished and stone used to build two houses in Mount Pleasant, though cemetery remains. Revival in 1904 led to installation of organ funded by Carnegie Trust and corresponding adaptation of chapel with 2 gallery ends removed to form new gallery within the alcove c 1912. Photograph before adaptation shows blank wall with more prominent gable above reredos arch. From 1920 an arrangement was made with Great Western Railway, whose line ran nearby, to provide a water supply to work a pump for the organ. New Sunday School built 1905. Building extended to rear to create 2 storey ancillary accommodation 1995. Although coming from a Welsh speaking tradition, and nearby Bethany having been built in 1858 specifically to serve the English speakers, by 1890s English was generally spoken in the area and this became the language of the new church.

Chapel in tall round-arched style. Of snecked rockfaced sandstone with yellow ashlar dressings; rendered to sides with yellow brick cornice and pilasters and some decorative rockfaced stone. Frontage has at gallery level tripartite window with elongated moulded round arches with foliage capitals and recessed half-round columns, deeply splayed sill with inscription and date below. Above is a roundel and very decorative billet-moulded eaves cornice. Stepped forward is the gabled porch with similar eaves and high round-arched doorway within a gable, recessed double doors with mulitpane overlight, decorative moulding to the doorway, recessed columns; porch is flanked by small bays with half conical roofs and billet eaves moulding, square-headed side windows, dedication stones below. This central bay is bordered on each side by pier buttresses extending above eaves level with band of ashlar decoration at eaves level and octagonal finial with moulded capstone. To either side are the lower 4-sided staircase bays with metal finials to roof, similar eaves band; similar round-arched windows to each floor, paired to sides, joined by a deeply moulded hoodmould. Deep splays to the windows extend to a moulded band over the projecting ground floor which has square-headed windows with shouldered lintels and end doorways with dedication stones below. This band is stepped up to the main frontage to adjoin the porch roof. Doors are boarded with decorative hinges and grained paint. To side the roof extends to eaves level of the staircase bays. Pilasters separate the 6 bays. Gallery windows are round-headed with moulded render surrounds and sillband; ground floor windows are square-headed. Below is a battered brick and stone plinth; eaves are stepped and of moulded brick. Attached to side right and rear is the 1990s wing.

Interior has 4-sided steeply raked gallery with bowed cast iron front and polished wood rail; this is further bowed round the sides of the moulded plaster arch, the recess occupied by the large organ. Fluted cast iron columns with leaf capitals support the gallery which has a bracketed soffit. Under the organ gallery is the small railed platform with pulpit and baptistry in front; this has hydraulic machinery; set fawr rail is similar to gallery. Windows have coloured glass, on S side with new frames. Large rear multipane window with coloured glazing to vestibule which has glazed doors to stairs, terrazzo floor and staircases with ramped rails and turned balusters. Decoratively panelled 7 bay wooden ceiling supported by heavy corbels. Boarded dado, scribed render to walls.

Listed as a fine late C19 chapel retaining its character, with the 1990s extension having been unobtrusively added to rear. Group value with Bethany Baptist Church, also the Entrance to and Jubilee Statue in Tredegar Grounds.