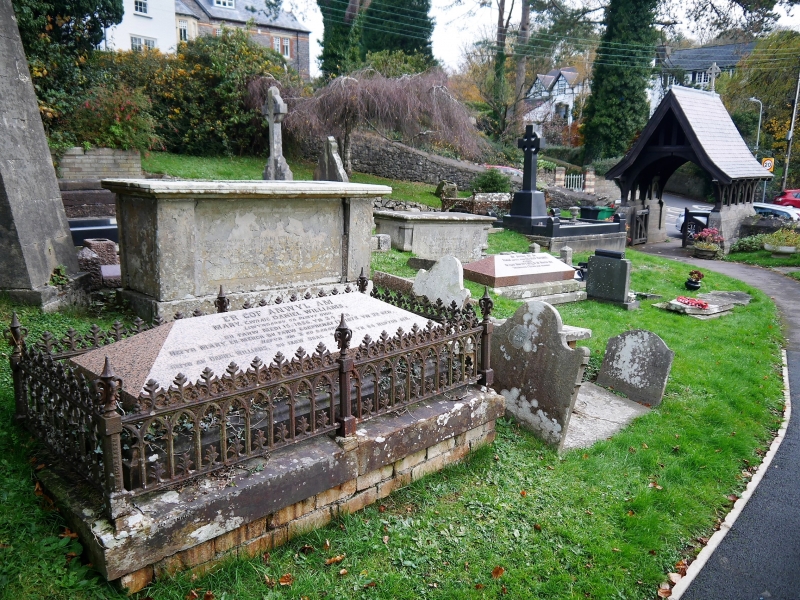 Location: In the centre of Pentyrch village, on a sloping site.

Built 1857 by Prichard and Seddon. An early medieval foundation dedicated to the Celtic Saint Catwg and site reputedly chosen for its proximity to a holy spring in S of churchyard and an offshoot of St Catwg's monastery at Nant Carban (Llancarfan). Earliest records are from C12.

Interior has painted rendered walls with exposed ashlar dressings and dark stained boarded roof; 5 bays to nave with arch-braced trusses and 3 to chancel with 2 tiers of windbraces. High and wide lightly moulded pointed chancel arch without capitals; carved corbels in chancel depict local ecclesiastics and were introduced in 1910. Stone pulpit to N with relief carvings of Saints David and Catwg designed by Prichard and Seddon executed later by Clarke of Llandaff. Carved reading desk shown in Great Exhibition of 1851. NW corner has re-sited monuments to Morgan family; also medieval grave slab with incised floriated cross with Latin inscription reputedly commemorating member of Mathew family of Castell y Mynach. Holy water stoup from former church. A medieval round pedestal font is unusually sited in round belltower at SW through a glazed pointed doorway; a C19 octagonal font on clustered marble columns stands at SW. Chancel up one step has organ N and sanctuary up 2 has later C20 stone altar; E window early 1900s by R J Newberry. Church also recorded as having two bells, one of which is pre-Reformation engraved 'Sancta Catrina', and the other of 1700 engraved 'William Howard'; also a Wedding Cannon made in Pentyrch Ironworks by Thomas William Booker.

Listed as a well-designed mid C19 Gothic Revival church, with eye-catching SW turret, described by Newman as one of the best churches designed by Prichard and Seddon. On an historic site and in a prominent village position; group value with lychgate and The King's Arms.