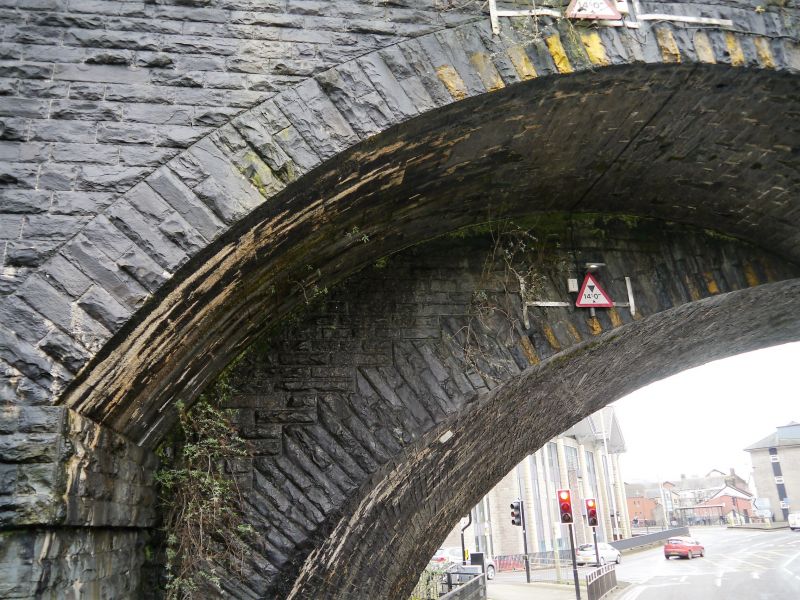 Location: Spanning the River Rhondda to the W of the town centre.

The Taff Vale Railway was the first major locomotive railway in Wales. It was incorporated in 1836, built 1837-40 and opened in 1840-1 from Merthyr Tydfil to Cardiff, primarily to serve the ironworks of Merthyr Tydfil. The chief engineer was Isambard Kingdom Brunel. The railway was built to the standard gauge, rather than Brunel's preferred broad gauge, because it was primarily intended as a mineral railway, although extant original bridges are wide enough to have accommodated a broad-gauge track. Work on the railway began in 1837 with the ceremonial laying of the first stone to the viaduct across the River Rhondda at Pontypridd by Lady Charlotte Guest, wife of Sir Josiah John Guest of the Dowlais Ironworks. The viaduct has a skewed river span of 33.5m, which was an impressive engineering achievement for its date, and was perhaps inspired by Brunel's wish to rise to the challenge of William Edwards' celebrated river bridge close by. The railway was widened to a double track 1845-61, which required the addition c1861 of a separately constructed viaduct abutting the earlier viaduct.

A viaduct of coursed rock-faced stone built in 2 phases. The earlier and wider single-track phase is the E side of the bridge. It has a single elliptical skewed arch across the river, and 2 round-headed arches to the S bank, of which the northernmost has an arched watercourse beneath it, while the southernmost is built into the bank. Thick bands are at impost level and beneath the parapet. The parapet is rebuilt. The later phase is also single-track, of 2 segmental arches spanning the river, of which the central pier has rounded cutwaters (the northernmost bay is now occupied by Mill Street, carried over the river on steel piers). A third narrower arch to the S bank is over a bypass channel from a weir beneath the main arches. The parapet is rebuilt and has a projecting band over the R-hand of the main arches only. The abutment to the N side is a later alteration, as it was built to carry a plate girder bridge over Rhondda Road.
Built across the later 2 river arches is a weir, comprising a dam of coursed stone approximately 1.2m high, with stone paving to the downstream side. Projecting at the N end is an arched sluice. The main bypass channel is on the S side.