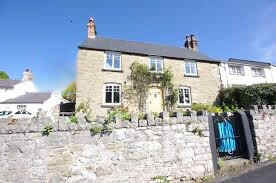 Location: Prominently sited in the centre of the village on the E side of the Red Lion Inn and set back from road behind garden walls.

Built in the third quarter of the C19 on the site of an earlier house shown here on the 1839 Tithe map. The character of the present house, with its steep roof and offset window, suggests that it is a remodelling of the earlier house. The rear wing was added in the C20.

A 2-storey 3-window house of rubble stone and slate roof, with a C19 brick stack to the R and later brick stack to the L. Openings are under segmental stone heads. The windows are 2-light casements each comprising a large pane below small panes with thick glazing bars. The window lower R is offset toward the centre. The central doorway has a boarded door. The R gable end abuts Smithy Cottages. The L gable end has a window lower L similar to the front. The lower rear wing is set back from the L gable end.

Listed primarily for its contribution to the historic character of Llanasa.