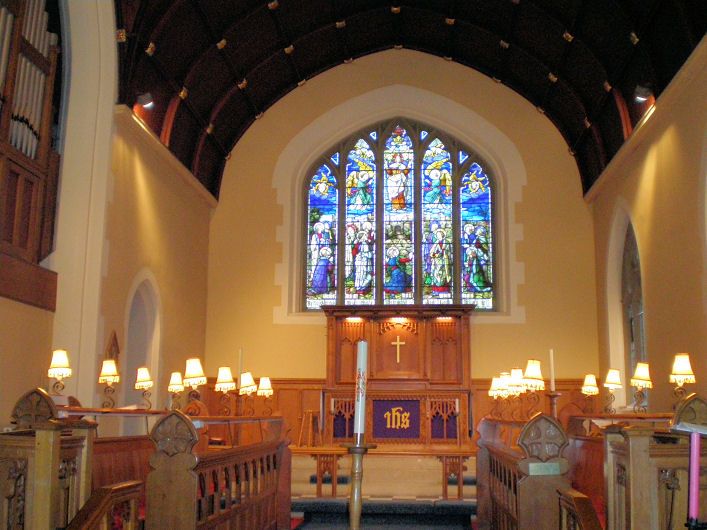 Location: On rising ground to the east of High Street, with a large graveyard mainly to south; lychgate to street, prominent war memorial.

In 1860 parts of Meliden and Llanasa parishes were severed to form the new parish of Prestatyn and Nant, and the first phase of the church of the new parish was completed to the design of T H Wyatt in 1863. The population of Prestatyn was then only about 500 but expected to rise rapidly, so the original design was for the nave, tower and spire, and two adjacent bays of the north aisle. The contractor was T W Chester of Liverpool and the cost was £1374. The space which was the chancel of this phase is now the eastern part of the nave, and the original east window now survives relocated as the Lady Chapel east window.

In the first major addition in 1905, by which time the parish population was 1500, the south aisle was built, and in 1910 the north aisle was extended to its present length, to the design of Protheroe and Phillpott of Cheltenham.

The completion of the eastern part of the church came in 1927, when the population had reached 6000; this included the chancel, the lady chapel and the vestry and a new organ chamber. This work was to the design of L W Barnard of Cheltenham and the cost was about £7000.

A church in local light-grey rock-faced limestone standing on elevated ground to the east of Prestatyn High Street, entered at the north side beneath a heavily buttressed broach-spired tower which dominates the architectural composition. The different architects involved have used different Gothic styles. Slate roofs throughout in graded courses, tile ridges, coped gables apart from the west gable of the Lady chapel. The door, window and other dressings of all phases are in a yellowish freestone. The earliest masonry is distinguished by the use of a mortar with coarse black grit.

In the earlier part of the church, the prominent west elevation is an Early English composition with paired lancets at west with roundels above, a small rose window above with dog-toothed ornament, and a central west buttress. A similar but smaller pair of lancets with roundel exists at the north side, west of the tower. The windows of the north aisle are paired lancets. The north aisle was completed in similar style, but the south aisle has triple Tudor flat-headed windows and a Tudor west door.

In the later part of the church designed in a free version of Perpendicular, the east window is of five cusped lights under a four-centred arch with a thin label mould; the chancel south window and the high window of the transept are of three lights with tracery and simpler label moulds. Other windows are square headed. The north transept door is coupled to single lights at side under a common label mould. The Lady Chapel east window is of Early English style, relocated from the first phase construction.

The spire is another Early English composition, octagonal, with its arrisses, base course, three bands and a small clock gable to the north picked out in freestone. Three belfry openings as paired trefoil headed lights with quatrefoils above in plate tracery. Generous tower buttresses with offsets, stair turret to north west, arched main entrance to north and paired windows to west, single lights above to west and north; five string courses.

The nave is entered at the north side by a pointed door within a low-pointed arch; a side door from the porch leads to the north aisle. The character of the interior is set by the breadth and lightness of both the nave and chancel and the unusual height and width of the chancel arch. The nave is of six bays with arch braced collar-beam trusses incorporating wall posts which start some distance below the wallplate level and mock ashlaring. The aisle arcades have equilateral pointed arches in two orders, chamfered, on hexagonal columns (and one round column from the original north aisle, supporting the two slightly lower arches of the first phase of construction under Wyatt). The aisle roofs are lean-to with a single purlin. The nave and aisle floors are part quarry tiles, part wood blocks. Open pews, the majority original, those at east added following construction of the later chancel. The pulpit, at left, is octagonal in Gothic style, the gift of the Welsh congregation in 1925. Three steps up to the chancel.

The chancel has a broad pointed and four-centred barrel ceiling with a side vault over the organ, with thin ribs and gilded bosses. The floor is of black and white tiles. The altar is in Gothic style with open miniature tracery. Three-panel reredos with the centre panel framing the altar cross. Lower panelling each side (donated 1951) and curtains. Communion rails and choir pews in simple Gothic style.

The vestry is at north and has a wood-block floor and a flat boarded ceiling. Two commemorative stones in the vestry record the building work of 1905 and 1927. The Lady Chapel to the south of the chancel is one step above the nave and aisle floor and is entered under a slightly pointed segmental arch. It has a pointed barrel ceiling, a wood block floor and a brass communion rail.

The east window depicts the Ascension and commemorates the completion of the church. The east window of the Lady Chapel is in three lights with the Good Shepherd in the centre light; this was the glazing of the original east window and is a memorial to six choirboys drowned in 1868, whose graves are adjacent to the south of the church. South window to G H Lees [1900], on theme of the Little Children. Other stained glass windows mid-C20. Boards to the left of the door to the porch list the vicars and the churchwardens from 1861, and a brass plate to the right gives the names of the fallen in the 1914-18 war.

The organ was built by Abbot and Smith of Leeds and installed in 1907. It now stands to the north of the chancel, its position having been altered and improved. The font is square with sunk panels on each face and a five-column support.

A plain late C19 church built to a phased programme reflecting the expansion of Prestatyn as a resort, of well integrated design nothwithstanding the involvement of three architects and the delay of completion of the chancel until after the Great War.