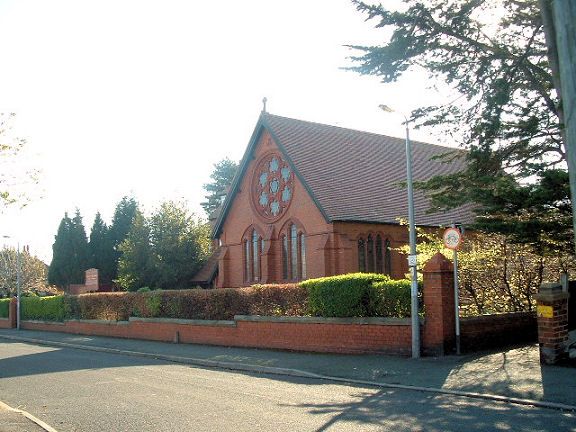 Location: To south of Plâs Avenue about 75 m east of junction with Clwyd Avenue.

The Roman Catholic parish of Prestatyn was established in 1903 and the church completed also in 1903 to the design of Edmund Kirby of Liverpool. The church was built at the expense of Sir Pyers Mostyn of Talacre. The contractor was Mr Thomas of Prestatyn, and the cost approximately £2000.

A wide building in red brick and terracotta, with a red tile roof. The walling is in English Garden Wall bond. Some bricks of a bluer colour are used to create a diaper effect in the brickwork, and some miniature bricks are used in the window head details of the (north-)west elevation. A fine feature is the squatly designed entrance porch at north, in arts and crafts half timbering on a high brickwork plinth. Double chimneys to left of chancel; link (possibly of later date) to presbytery.

The nave is of four bays articulated by buttresses; the apse defining the chancel is polygonal in five bays. The apse is narrower than the nave, but has a higher eaves so the roof goes through without interruption; to resolve the clash at eaves level the architect has used little hip-roofed transepts at each side, which have no interior presence.

The apse elevations are fenestrated in groups of three lights with simple foliated heads, and there is a string course at head which continues around the lights as a label mould, and a string course at sill level. Plinth offset near ground level. The pseudo-transept facing south has three similar but taller lights. The nave side bays to north and south have groups of four similar lights. The west elevation is in two bays defined by buttresses, and has a three-light group in each bay under a tall relieving arch and a large seven-light cusped rose window above. This elevation faces the street and is more ornate in detail.

The porch is open-fronted, built upon brick side walls in massive timber framing with leaded-glazed front and side windows. The name of the church appears on the collar beam. The roof is gabled to the front with forward projecting wallplates tusk-tenoned into the bargeboards. The roof merges with a non half-timbered lean-to part adjoining the nave incorporating twinned pointed lights. Within the porch the entrance door is plain and has splayed reveals and a pointed arch. Small water stoup at right.

The nave is entered by the north west corner, through a large door with multiple bracing internally. The nave is broad and short, with a large chancel arch opening into a polygonal apse. The chancel starts at a step about 1.5m west of the arch.

The nave roof in four bays with high collar beam trusses with cusped struts above and large arch braces below extending considerably beneath wallplate level. Interior plastered and painted white. Wood block floor, pitch-pine pews with open backs. At left is an anteroom to the confessional. Cinquefoil headed niches with Christ with Wounds and Sacred Heart to left of chancel arch and Virgin and Child to right. Around the nave are the Stations of the Cross in oak frames. In the south west corner is a recently acquired organ.

The chancel has similar roofing adapted to the apsidal form. The altar is of coloured and highly figured marble with a mosaic cross at centre, but is not original to the church (donated 1925). It was recently brought forward from the reredos. Before the altar are a lectern, seat and font, all recent, in figured marble with inlays. The reredos is original, carved in intricate late Gothic style, with niches for four saints and a central Throne of Sacrament above the veiled Tabernacle. A top stage of reredos finials appears to have been lost. The saints in the niches to the right are SS Peter and Frances to whom the church is dedicated, to the left are St Francis and the Virgin. To the left of the altar is an aumbry and to the right a piscina. Double doors at left lead to the link to the presbytery.

A Roman Catholic church in a free Gothic style making good use of mass-produced materials (brick, tile and terracotta); simple and well detailed throughout.