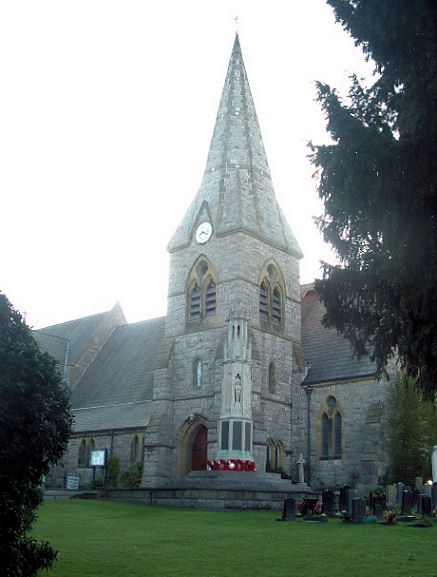 Location: Close to the west end of Christ Church, within the churchyard.

An octagonal monument in oolitic limestone and in late Gothic form, in three stages. The lowest has bronze plaques recording the fallen in the Great War and additional plaques for the names of the fallen in the Second World War. The second stage, slightly reduced, consists of blind tabernacles beneath crocketted ogee arches, with a band of two quatrefoils in each bay at foot. One tabernacle is trefoil-headed and contains a statue of a soldier of the Great War with arms reversed. The top stage, further reduced, is of eight openings with crocketted ogee headed arches and separating buttresses, the latter braced by little flying-buttresses to the finials of the lower buttresses. Gargoyles at the top and bottom of the top stage and further quatrefoil sinkings between. Top finials crocketted.

The base is four ashlar steps in local limestone, on a paved platform.

A fine memorial of the Great War, in late Gothic form with carved stonework of superior craftsmanship, by the same architect as the completion of Christ Church.