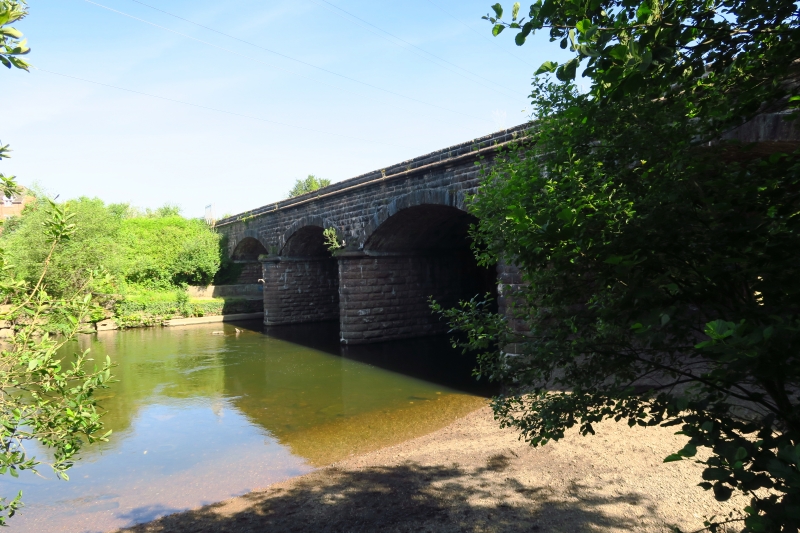 Location: In the north-west corner ofLlandaff North Community on the Cardiff-Merthyr line between Llandaff and Raydr stations.

This viaduct was built in three phases which can be recognised quite clearly in the stonework (see below). The first one is wholly covered on both faces, but the basic form of the piers and arches and the character of the stonework were set then. This bridge was built for the Taff Vale Railway and was designed by I K Brunel. The line was opened from Cardiff to Abercynon in October 1840 and was for only a single standard gauge track.
'There were other problems on the Taff Vale main line which derived from a combination of geography, an early lack of capital with which to improve line capacity, and the eventually tremendous increase in train movements. After the main line was doubled from 1845 onwards (completed to Merthyr by 1861 ), the company briefly ran its trains on the right hand track; initially all the locomotives were at the Cardiff end, and the day's movement had to start from there. As traffic grew, the main line was quadrupled through to Pontypridd, but the location of Crockherbtown Yard on the Down (east) side of the tracks, and of the lines thence down to the docks, dictated that the goods lines be on the east side as far as Llandaff, 4 and a half miles (7.25 km) from Cardiff. It was on this side also that of necessity the Roath branch, about five miles (8.05 km) long and opened in 1888 round the east side of Cardiff to serve Roath Dock, came in to join the main line. But at Llandaff it was essential to carry the freight lines across the passenger lines on the level, and to connect them by a spur into the Radyr Yards, thereafter the goods lines remained on the Up side all the way to Pontypridd. (This was the Llandaff Loop which avoided the viaduct and is currently [11/01] being demolished.) A working timetable of 1897 shows 190 passenger and freight trains traversing Llandaff Junctions in a normal working day.' (Barrie)
This story can still be clearly read in the viaduct. The line quickly became overloaded and a second track was added to the viaduct on the downstream side. This work dates probably from 1845-50 and would also probably have been overseen by Brunel as Chief Engineer. Later in the C19, probably 1880-5, the line was given four tracks because of the very heavy use by coal trains, and the viaduct was widened on the upstream side, but with the previous facing stonework reused. The second widening was also undertaken by the Taff Vale Railway which remained independent of the Great Western until Grouping in 1923. The Taff Vale was consistently the most profitable railway company in Wales, but it suffered a severe setback in 1888 when the Barry Railway opened and stole a good proportion of the coal traffic, but the major improvements to the Taff Vale were probably complete by then, including the Llandaff Loop and the Roath Docks branch, both opened in 1888. The viaduct has been unaltered since then, apart from the addition of a concrete footbridge to the upstream side in the late C20. There is no longer any coal traffic in Wales and the viaduct has reverted to two tracks which are carried on the later upstream side.

The viaduct is constructed of heavily rusticated stone with smooth faced ashlar only in the orignal Brunel arch soffits. The stone is conglomerate for the first two builds and probably limestone for the third build. Both faces, however, are second build, the upstream one was reused in the third build, while the downstream one is as left by the second build. The viaduct is about 45m in length and 7m high. It has five arches with bull nosed piers, each with a roll moulded cornice. The arches are segmental, and above this a roll moulded cornice to the parapet. The upstream face has had a concrete footbridge added; this is supported off the tops of the cutwaters. The soffits of the arches clearly demonstrate the three builds, the original Brunel one, the widening on the downstream side and the second and greater widening on the upstream side.

This viaduct is a handsome structure which goes in part back to the beginnings of main-line railways in Wales. It is a significant survivor from the Taff Vale Railway, which opened in 1840, and its present appearance is clearly still due to the original design by I K Brunel. The Taff Vale was built at the same time as the Great Western, but it was fully opened before any of the more famous line had even entered Wales.