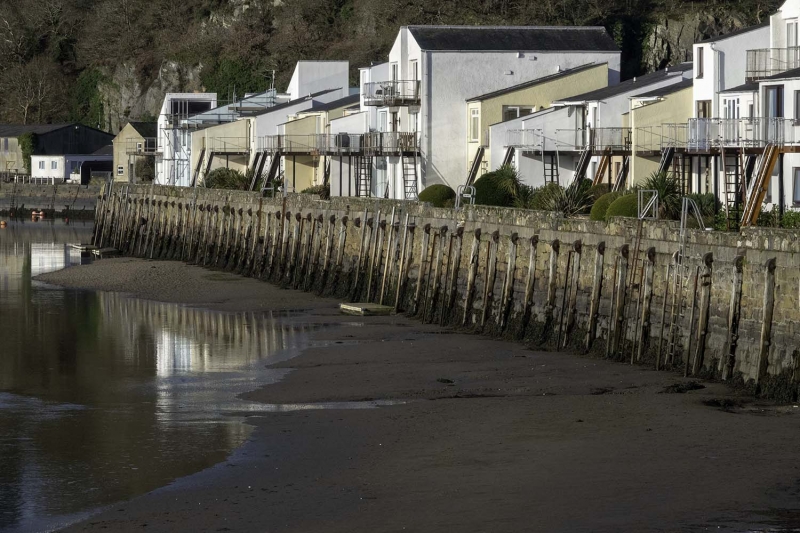 Location: On the outer E side of the harbour to the SW of the Cob.

Porthmadog Harbour was developed from the 3rd decade of the C19, at first by landowner and improver William Madocks (1773-1828). Madocks had reclaimed a large tract of land known as Traeth Mawr, that formed the estuary of the Afon Glaslyn, by building a Great Embankment (now known as The Cob) 1808-11. One of the fortuitous consequences of diverting the river was that it swept away sandbanks to leave a deep natural harbour ideal for serving the region's growing slate industry. The Act of Parliament for Porthmadog Harbour was passed in 1821. By 1824 the new port was already ready to receive vessels of up to 70 tons (71.12 tonnes) laden. The engineer was John Williams, and the contractor Griffith Griffith.
In 1833 Samuel Lewis said it was accessible to vessels of 300 tons burden, and noted that 'many good houses have been built, and a considerable trade is now carried on'. Imports were mainly timber, coal and lime. Exports were chiefly slate and copper ore. In 1825 11,396 tons of slate were exported, rising to 31,200 tons in 1840, 51,109 tons in 1854 and 168,947 tons in 1884, although the growth in volume disguised the decreasing profitability of slate exports. Shipbuilding also became a major local industry from the 1850s to the 1870s, with a further revival between 1891 and 1913, when Porthmadog was noted for building 3-masted schooners.

To comply with the provisions of the Act of Parliament, Madocks had a short stone quay built at Cornhill, which henceforth became the commercial centre of the port. Slate Companies who purchased wharves were responsible for building their own quays, the first of whom was Samuel Holland of Liverpool in 1836, who had purchased Rhiwbryfdir Quarry in 1820.

New Wharf was the last of the wharves to be built. It is shown on the 1871 Tremadog estate survey, 1885 harbour survey and 1888 Ordnance Survey.

A quay approximately 230m long NE-SW, of coursed rock-faced stone, incorporating mooring rings and timber buffers. A low stone parapet has been added, behind which are original cast-iron mooring posts. It has a 40m return wall at the NE end and a shorter 10m return at the SW end where the angle is rounded.

Listed for its special interest as a well-preserved C19 wharf and for its important contribution to the overall historical integrity of Porthmadog harbour.