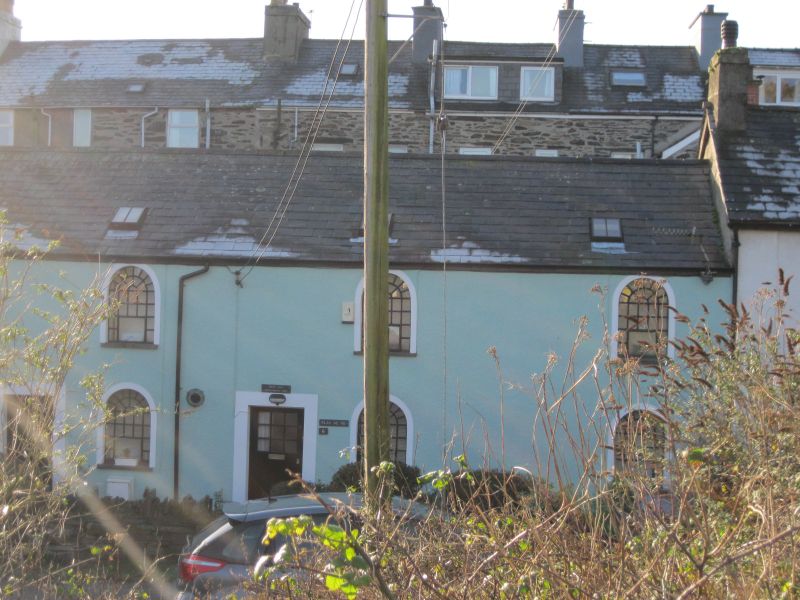 Location: In the centre of a terrace of houses on the N side of Britannia Terrace (A487) and facing N.

Originally 3 cottages, part of a row of cottages erected for workmen at Britannia Foundry (which stood immediately to the E but has been demolished), which is not shown on the 1842 Tithe map but is mentioned in a trade directory of 1844. The cottages are shown on the 1871 Tremadog estate plan and the 1888 Ordnance Survey. They are now amalgamated into a single dwelling.

A 2-storey 3-window range with a roughcast front painted green and with smooth-rendered architraves, and slate roof with added skylights. Originally 3 cottages with windows to the R and entrances to the L, only the centre and L doorways have survived, both with replacement half-glazed doors. Windows are round-headed iron-framed windows with small-pane radial glazing, probably cast at the Britannia Foundry. Small pivoting lights within the windows have been removed.

The rear has replacement windows.

Listed as part of a terrace of workers' houses which (notwithstanding adaptation) retains distinctive industrial character and original detail. Urban terraced housing of this type and date was once common, but is now rarely well preserved.