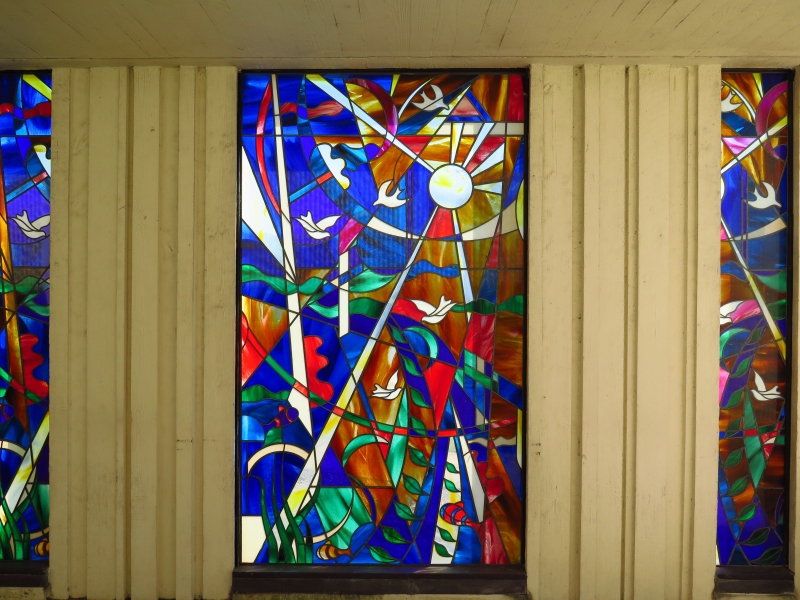 Location: Located along a service road c600m south from Heol Cae’r- Bont, west of Junction 38 of the M4 motorway.

Crematorium chapel by FD Williamson & Associates of Porthcawl. Opened on 25th April of 1969 by the Secretary of State for Wales George Thomas MP. Built to serve the cremation needs of the west Glamorgan area and located in a landscaped setting adjacent to the Eglwys Nunydd Reservoir and the M4 motorway.

Williamson had worked on the development of Croft Court in 1961, a block of flats on the front at Tenby on the site of John Nash’s Sion House. More notably he had designed Narberth Crematorium in 1968, a smaller scale modernist precursor to Margam, and in the same year as Margam the prestigious National Recreation Centre (now the Sport Wales National Centre) in Sophia Gardens in Cardiff.

The establishment of a crematorium at Margam belongs to a period of change in the provision of funerary services in the post war era in South Wales. A crematorium at Llwydcoed designed by HMR Burges & Partners was under construction at the same time and was completed in December 1970. Provision in Mid Glamorgan was provided by a new facility built at Coychurch in 1970 designed by Maxwell Fry of Fry, Drew and Partners, a leading architect in Britain in this period.

Cremation had been revived in the late C19 but because of deep rooted conservative approaches to funerary practice it did not become widespread until after the second World War. Because cremation was a new practice the design of crematoria was unhindered by existing architectural tradition and doctrine, each new crematorium was built to accommodate new ideas on death and remembrance in a society rapidly changing in the post war period.

The first crematorium in Wales was converted in 1924 from one of the cemetery chapels in Glyntaff Cemetery in Pontypridd. The first purpose built crematorium was constructed in a European style in 1953 at Thornhill, Cardiff, followed by Swansea (1956) and Colwyn Bay (1957). Modernism was embraced for the next phase of crematoria construction with the development of cremation provision in Glamorgan: the crematoria of Llwydcoed, Coychurch and Margam represent the development of a creative and thoughtful architectural approach unique to Wales and a subtle and sophisticated use of materials and plan forms.

Crematorium complex in modernist style, characterised by the use of exposed concrete, massing of the geometric forms of each element of the complex and single-pitch roofs of contrasting angles. Emphasis is given to the main buildings with the use of ribbed rusticated concrete whereas the linking structures use irregular cast surfaces.

The complex is centred on the main chapel building, accessed by a covered entrance on the NE corner with flanking covered waiting area to the side of the chapel, providing shelter and privacy for mourners arriving from the crematorium car park to the E.

Attached to the W of the chapel is the office and support range, with incinerator stack to SW. Within the angle of the chapel and office range is an enclosed courtyard, with a screen wall to the south linking with the smaller chapel of the remembrance of to the SE. A covered walkway links the exit from the main chapel, in the NW corner of the courtyard with a further covered walkway on the E side of the courtyard, this leads to the chapel of remembrance and as a return exit to the crematorium car park.

The main chapel, along with the incinerator stack are the main elements of the crematorium. The chapel has a dual pitched roof set higher than the rest of the crematorium, steeply angled to its S and gently sloping to the N terminating in a ramped pediment to the entrance side. Entrance portico attached to NE corner, N wall with a band of windows, four central horizontal windows with a block of three tall vertical windows to the right and five, irregularly arranged, to the left.

Service wing set back and lower to the W, entrance on the N side and a long elevation of mainly tall vertical windows to the W, continuing past the tall incinerator stack. Screen wall wraps around the SW corner and encloses at a higher level the south side of the central courtyard to the chapel of remembrance as a series of panels with breaks in between.

Chapel of remembrance echoes the design of the main chapel with a steep monopitch roof angled to the S, its south wall entirely a Dalle de verre panel (broken coloured glass). Long plain covered walkway encloses E side. Interior of courtyard dominated by S wall of chapel which has Dalle de Verre panels and angled clerestory lights above.

Included for its special architectural and historic interest as a fine example of a post-war crematorium, which was a new building type of the twentieth century. The building is especially imaginative and creative in responding to the design challenges of the building type, with a plan and layout that skilfully handles the circulation of users through the building and separates its functions, and with a simplicity of design and detail that helps to create a sense of spirituality appropriate to its purpose.